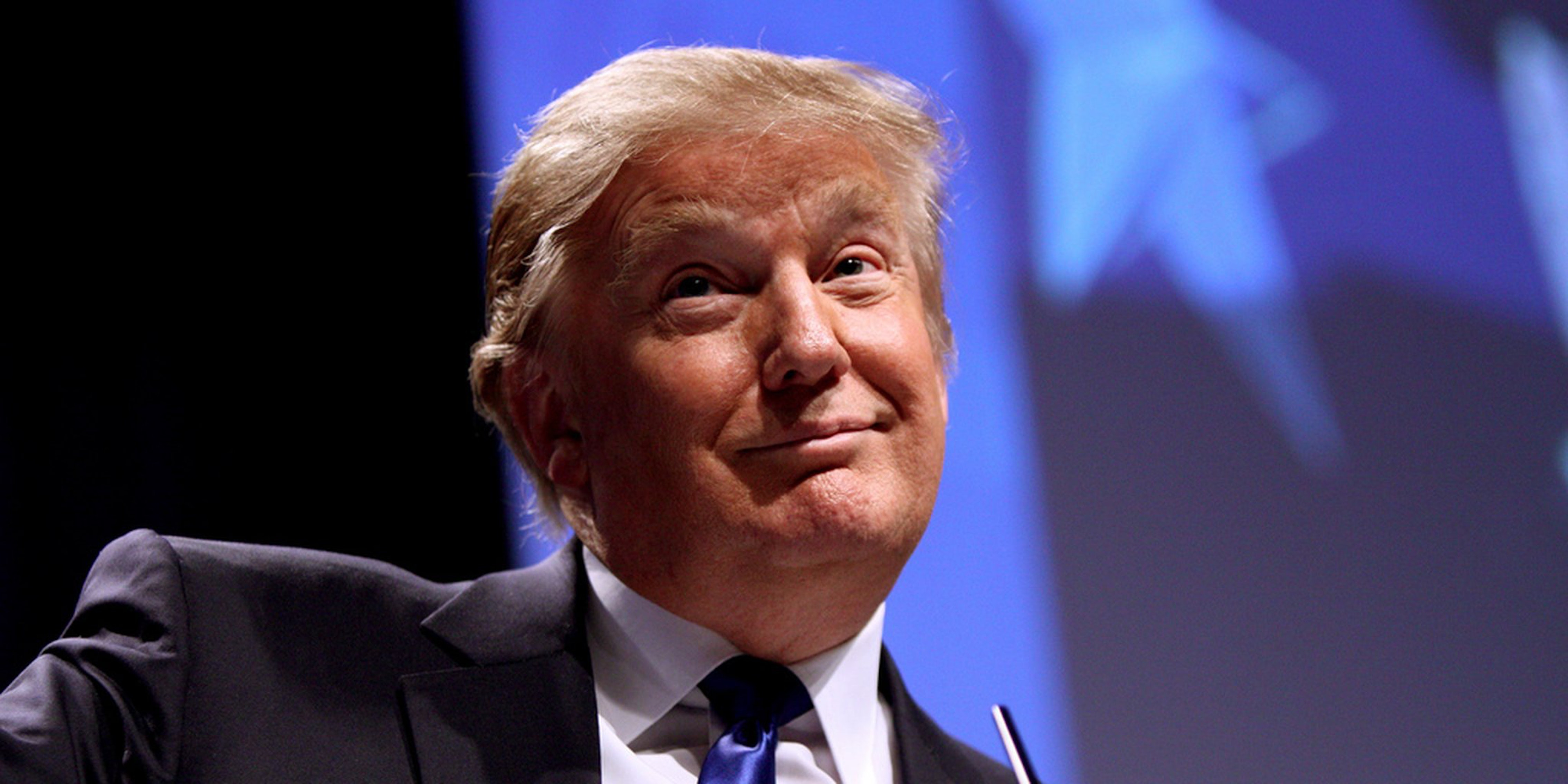 Yet only one of them would ever run for president.

Back in 2008, Republican presidential candidate Sen. John McCain (R-Ariz.) released an ad attacking Democratic nominee Barack Obama for being a “celebrity.” To illustrate his point, McCain’s commercial included a picture of so-called “celebutante” Paris Hilton. After all, what better way to make Obama’s bid for the Oval Office seem absurd than to compare his career with that of someone whose name literally appears next to “professional celebrity” in the Urban Dictionary?

This brings us to our question of the day: Why is Donald Trump, who just announced that he is running for president, taken somewhat seriously as a candidate on the Internet, despite being no different than other professional celebrities, like Hilton or Kim Kardashian? No one seems to think he can win, but at least he wasn’t laughed out of the room. Can you imagine if Paris Hilton ran?

But make no mistake about it, Trump is just as much of a professional celebrity as any celebutante.

Born into a privileged family—his father, Frederick C. Trump, built the real estate empire that carries the family name—Donald Trump became a national figure during the 1980s, when his opulent lifestyle and flair for brazen self-promotion made him the perfect poster child for the zeitgeist of that era. He nicknamed himself “The Donald,” married a supermodel (and then was mired in a high-profile divorce), and managed to keep himself in the public eye as a reality TV star long after other ‘80s business icons had faded from our cultural consciousness.

The only meaningful difference between Trump and the likes of Hilton and Kardashian (besides their gender) is that Trump has been a miserable failure in his businesses.

This may be hard to believe, given how frequently Trump touts his own business savvy, but the record doesn’t lie. Innumerable Trump business ventures have failed, from entertainment resorts and hotels to mortgage companies and airlines, and he has had to file for corporate bankruptcy at least four times. What’s more, despite presenting himself as a fiscal conservative, Trump’s continued presence as a major financial figure is largely due to the aid of the federal government; when it was revealed in 1990 that The Trump Organization was $5 billion in debt, The Donald only survived thanks to a federal bank bailout that allowed him to defer on the $1 billion of debt personally guaranteed by Trump himself.

Make no mistake about it, Trump is just as much of a professional celebrity as any celebutante.

By contrast, both Hilton and Kardashian have had considerable successes in the business world. Hilton was named Variety’s “Billion Dollar Entrepreneur” in 2011 due to her success in parlaying her personal brand into a reality TV show, a modeling career, and “collections of handbags, watches, sunglasses, fragrances and clothing.”

Similarly, Kardashian appeared on the cover of Success Magazine the following year thanks to a wide range of flourishing business projects that included “a skincare line, five DASH clothing boutiques around the globe, a book titled ‘Kardashian Konfidential,’ a Kardashian Khaos lifestyle boutique inside The Mirage Hotel in Las Vegas, a Kardashian Kollection handbag line, a Kardashian Kolors nail polish line for OPI, a fragrance, clothing collections with Sears and Bebe, and a sold out Belle Noel jewelry collection for Bloomingdale’s, among others.” Just last year, she made an estimated $85 million from her Kim Kardashian: Hollywood mobile game.

None of this means that Hilton or Kardashian are qualified to be president. While the ideal of a businessman president may appeal to a certain segment of conservative and libertarian voters, Americans have historically voted for candidates based on their political or military backgrounds. Until George W. Bush, no American president had even held an MBA, and the last time America elected a president best known for his business career (Secretary of Commerce Herbert Hoover in 1928), the promise that his business acumen would ensure national prosperity was obliterated by the Great Depression.

Having said that, if one wishes to argue that business success is indeed a valid qualification for the presidency, Hilton and Kardashian make far more sense than Trump among the professional celebrity set. Yet even though the Internet would laugh at either Hilton or Kardashian if they announced a presidential campaign, Trump is (at least ostensibly) taken seriously. Why?

It’s hard to avoid the conclusion that sexism is the major variable here. In an article for Business Insider last year, Lisa Eadicicco discussed how many of the most successful female business entrepreneurs have stories of being asked to sexualize themselves in order to succeed (this may be a good time to reevaluate the cultural significance of those Hilton and Kardashian sex tapes). Gene Marks of Forbes explained the problem more directly in his editorial, “Why Most Women Will Never Become CEO”:

Ever seen what it’s like to be a woman in today’s workplace?  Sure, things have come a long way since the days of Mad Men. I don’t see guys patting their secretaries on the backside or calling them ‘honey’ or ‘darling.’ But the sexism is still there. It’s just more concealed.

I’ve been in more than a few meetings where once an attractive female staffer leaves the room one or two of the guys will comment on her hotness. … Guys are still checking out the girls in the office. I see their body language noticeably change whenever a pretty female employee enters the room. Words, thoughts and important points are missed because of a new perfume or a low cut blouse. It works the other way too. The less attractive female employees are also frequently ignored… for the opposite reason. Men are still trying to take women seriously in the workplace.

As we can see, the attitudes in America’s boardrooms easily spill out into its political culture. When Trump condescendingly dismissed the political ambitions of former Hewlett-Packard CEO Carly Fiorina in a statement that specifically mentioned her being a woman twice, the mainstream media paid little attention to either the brazen hypocrisy of his claim or the mansplaining tone that he used when making it.

Similarly, despite having a business career that is no less rooted in professional celebrityhood than those of Hilton or Kardashian, Trump is still widely regarded as a respected businessman, even though his female counterparts are still chiefly regarded as tabloid fodder.

The bottom line is that, if Trump is going to be covered online as a serious presidential candidate, then anyone else boasting a similar background deserves the same coverage and de facto credibility. On the other hand, if the notion of a Hilton or Kardashian presidential campaign strikes you as self-evidently absurd, than it’s time to stop letting Trump benefit from male privilege and ridicule his real candidacy as much as we would any hypothetical candidacy from the day’s most prominent celebutantes.

As a parting gift, I leave you with Paris Hilton’s response to John McCain’s “Celebrity” ad, which showed far more humor and self-awareness in two minutes than Trump has displayed in his entire career.