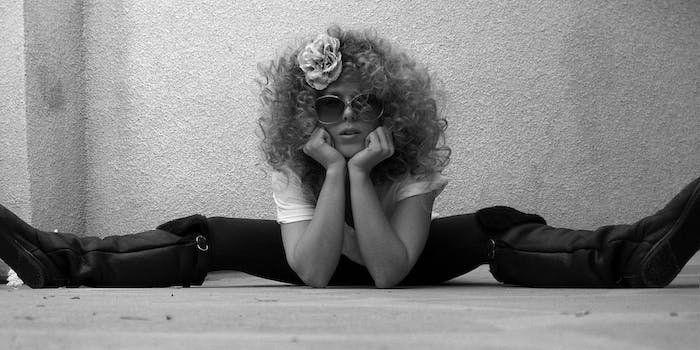 If white women can wear afros, why can’t black people have natural hair at work?

Black is 'cool'—until it means you're unemployed.

This week, Allure magazine published a service piece teaching white women how they, too, can sport an afro, “even if [they] have straight hair.” The brief feature offered eight step-by-step instructions for what’s actually not an afro but a twist out. That’s because the afro is, indeed, more than just a hairstyle—it’s what black hair looks like in its most natural state, based on heredity. More often than not, black hair is not naturally straight; it’s kinky, tightly curled, or even nappy, as some would call it.

Clearly Allure learned nothing from Rachel Dolezal. Despite the cultural history of the hairstyle, the magazine’s editors defended the feature as an “individual expression of style,” in a statement to BuzzFeed. When white women style their hair in similar ways, they get praised as trendsetters and fashion icons. However, black women endure racial bias and discrimination for wearing their hair in afros, braids, dreadlocks and other natural styles.

Here’s a question: If black women’s hairstyles suddenly become “normal” just because white girls begin wearing them, will we no longer face workplace discrimination for rockin’ the ‘fro? I highly doubt it.

For instance, black hairstyles are often targeted by workplace dress codes, which dictate what is and isn’t acceptable for employees to wear in the workplace. Straight hair—which is natural for many women who aren’t black—is perfectly fine, but an afro, braids, and other natural black hairstyles are often regarded as “unprofessional” and thereby unacceptable. Cosmopolitan reports that, even for white women, curly hair is often frowned upon, and for their black counterparts, that stigma is even worse.

While white women might think it’s hip to look black, black women in the workplace might find the exact opposite, as many fear discrimination when applying for a job. During a 2013 panel at Georgia State University, “Black Women, Their Hair & The Work Place–A Dialogue,” the biggest concern among the 100 women polled was that prospective employers might balk at hiring a woman with natural hair. Interestingly, Glamour magazine caused controversy when their editors told a group of female lawyers at a New York firm that natural hair in the office was a “no-go.”

For many black women who wear their hair in an “ethnic” style, it’s not done to purposely step on the toes of potential clients and bosses. In making the decision to wear our hair in its most natural state, we have to ask ourselves some troubling questions:

These questions aren’t hypothetical. For black women, they’re very real. Just a few years back, 24-year-old finance employee Ashley Davis reportedly got a disturbing message from her bosses about her dreadlocks. In an updated company policy from Tower Loan, Davis claimed that just months after getting hired, she was given a tough choice: Cut her locs—which had taken her 10 years to grow out—or face unemployment.

In a statement about the matter, Tower Loan noted that it has a “clearly defined” appearance policy, believing that it’s necessary for the success of the company. Although Davis’ story is certainly upsetting—making a woman of color choose between her culture or her job—her story is not an isolated incident. Meteorologist Brenda Lee was let go by her employers at KTBS in Louisiana after defending her right to natural hair.

These women were forced to adhere to European beauty standards in order to be seen as “professional,” and otherwise, they’re shown the door. This behavior sends a message that our beauty is inferior.

However, the culture their hair represents is incredibly important to women like Davis and Lee. Historically, black people have used the afro to serve as an expression of self, and it was even a political statement against assimilation, one that rose in popularity during the Civil Rights Movement. Forty years later, afros continue to carry the weight of black struggle, and the more that important staples of black history are devalued, while being appropriated by other cultures, the more they lose their historical significance.

This is why the Allure spread hurts so much for black women, as white people are sending a clear message about racial power dynamics. When magazines like Allure offer afro tutorials to white women, it says that black culture is only cool, mainstream, and acceptable when white people can take it for themselves. When white women have afros, they’re on trend; when black women do it, they’re on the market for a new job.

If there’s going to be any semblance of fairness to this so-called cultural exchange, then black people should get something out of it. Let us wear our afros and braids in the workplace, and maybe we won’t mind sharing our hairstyles with you as much.

Photo via LoveMaegan/Flickr (CC BY 2.0)