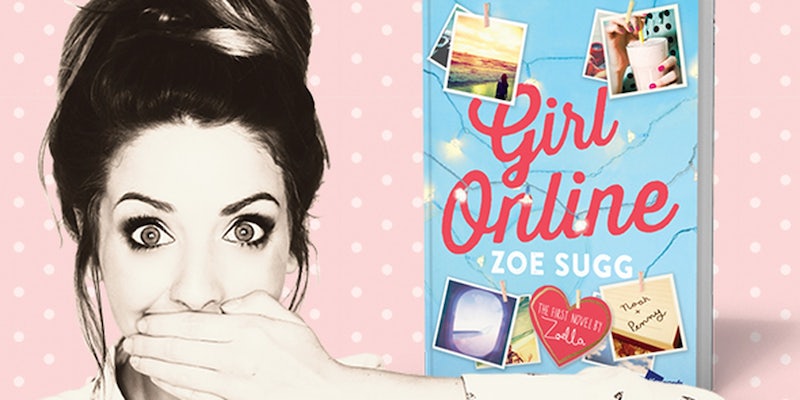 Fifty Shades of Taking Credit for Someone Else's Work.

Girl Online is the fastest-selling debut novel in history—and you’ve never heard of the author.

After a week of speculation surrounding a mysterious acknowledgment of an unknown writer in her new book, Zoe Sugg, better known as the British YouTube celebrity Zoella, has admitted her book was ghostwritten.

Siobhan Curham is an author and writing coach who wrote excitedly on her blog and Goodreads account in August that she had been hired to write an 80,000-word novel—roughly the length of Girl Online—for a major publisher in six weeks.

Today, Penguin representative Tania Vian-Smith told the Bookseller that Curham “was part of the editorial team” who assembled the book.

Many of the eagle-eyed readers who gobbled up Girl Online in its record-breaking opening week noticed that in the acknowledgments, Sugg thanked Curham as part of the Penguin editorial team—odd, since the publishing company only briefly acknowledged her as an “editorial consultant” in a promotional release for the book, and only one of the 12 novels on her Amazon author page is published by a Penguin imprint.

Sugg thanked Curham for being “with me every step of the way.” As Bibliodaze noted, the phrasing raised eyebrows: “It’s a commonly known industry tidbit that a ghost-writer is always acknowledged as such – worded in a way that those in the know will easily get it yet not too obvious for others.” If Sugg had simply acknowledged Curham on the title page, or had her debut been a smaller success, it wouldn’t have been a big deal. But the author of the fastest-selling novel in history deserves at least some of the credit, right? “I just in NO WAY imagine that zoe would do something like that,” commented Zoella fan Laura Reis on the earlier Daily Dot article speculating on the possibility.

Yesterday, Sugg finally came clean, admitting that while “the story and characters” were here own, she needed “help” to write her first novel, without mentioning Curham by name:

This might answer some of your tweets! X pic.twitter.com/NCuC3VhxiG

Earlier today, an unknown Penguin representative corroborated her statement, confirming to the Sunday Times (via the Guardian) that Curham is the book’s other author.

“To be factually accurate, you would need to say Zoe Sugg did not write the book Girl Online on her own,” the representative of the company told the paper.

But it might be more accurate to say that the novel, which Penguin hailed prior to its release as having “Zoe’s relatable, fresh and engaging voice,” might actually have Siobhan’s relatable, fresh voice. A blurb on Curham’s author blog for an upcoming self-help book for teens reads:

As twee as that kind of fake netspeak might sound, it’s easy to see how it could appear simple and relatable to teenage girls—especially if they thought the woman behind the words was their role model Zoella. In her full statement, Vian-Smith stuck by the claim that the book was most authentically Sugg’s:

As with many new writers she got help in bringing that story to life. If you read the book, it is clearly Zoe’s story and an expression of herself… As publishers our role is, and always has been, to find the very best talent and help them tell their story and connect them with readers. Talented YouTube entrepreneurs such as Zoe are brilliant at understanding and entertaining their audience. For her first novel, Girl Online, Zoe has worked with an expert editorial team to help her bring to life her characters and experiences in a heartwarming and compelling story.

Curham herself was staying mum on Twitter after the news, though she did thank followers who offered her support:

@NicoleBurstein thank you so much – very much appreciated right now x

Curham probably isn’t kidding. If her own account of writing a book in just six weeks is about Girl Online, the experience was incredibly intense: Her how-to guide speaks of chugging lemon-water, getting regular exercise, and treating the experience like a runner’s marathon. And if reports in the Telegraph from last week are true, other authors who claim they turned down Penguin’s offer say they were only offered £7,000–£8,000 ($11,000–$12,500) for the entire project, which includes a sequel of about the same length.

Sugg’s debut sold 78,000 copies in its first week. That level of success may be a huge achievement to Curham, who wrote movingly in 2012 of her struggle to establish her career as a writer despite early setbacks.

But it probably won’t do any favors for Sugg, who has received so much backlash over the furor so far that she’s decided to take a break from the Internet for the holidays.

Bare with me on vlogmas. I'm taking a few days out and off the internet because it's clouding up my brain. Thanks for understanding ❤️