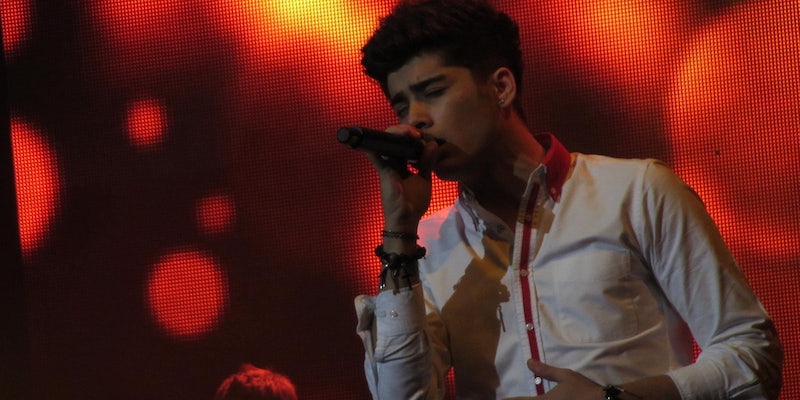 One Direction and Zayn Malik go in different directions

And then there were four.

After a week full of rumors that Zayn Malik was leaving One Direction, the band has officially confirmed the sad news: The hottest member of the band is saying goodbye.

The band’s Facebook page has been updated with a heartfelt announcement and messages to fans from Malik and the remaining four members of the band.

Harry Styles, Liam Payne, Louis Tomlinson, and Niall Horan “will continue as a four-piece.” This includes finishing their current world tour and recording their fifth album later this year.

Malik stated his reason for the departure was his wish “to be a normal 22-year-old who is able to relax and have some private time out of the spotlight.”

He stated the four remaining members would be his “friends for life,” a sentiment echoed in the joint group statement from the rest of the band:

“We’re really sad to see Zayn go, but we totally
respect his decision and send him all our love for the future. The past five years have been beyond amazing, we’ve gone through so much together, so we will always be friends. The four of us will now continue. We’re looking forward to recording the new album and seeing all the fans on the next stage of the world tour.”

In terms of sheer popularity, Zayn leaving 1D is a bit like John leaving the Beatles. The announcement was tweeted by the Associated Press as breaking news, and the impact was instantaneous: At press time both “Zayn” and “So Zayn” were already trending in the U.S., with the news rapidly flying around the Web.

Alongside the announcement came a number of disheartening Islamophobic jokes connecting Malik, who is Muslim, with the terrorist group Isis.

Though the general outcry over the news was immediate, Directioners have actually been bracing themselves for the news all week, after Zayn was absent from the band’s recent tour stops. Despite hopeful predictions from the likes of Billboard that he was just taking a break due to stress, the split is, alas, permanent.

It’s been a rough week for the 1D fandom. Over the weekend fans learned that Tomlinson and his longtime girlfriend Eleanor Calder had broken up. Their relationship was the ongoing source of many rumors, and Calder was the oft-abused target of the Larry Stylinson conspiracy.

But on Tumblr, where One Direction has racked up more posts in its honor than any other single entity in existence, fans were supportive. As tends to happen whenever sad news breaks out among one Tumblr community, members of other fandoms began posting to show their support as well.

It’s hard to believe it’s been five years since the world first heard his voice.

Don’t be a stranger, Zayn.