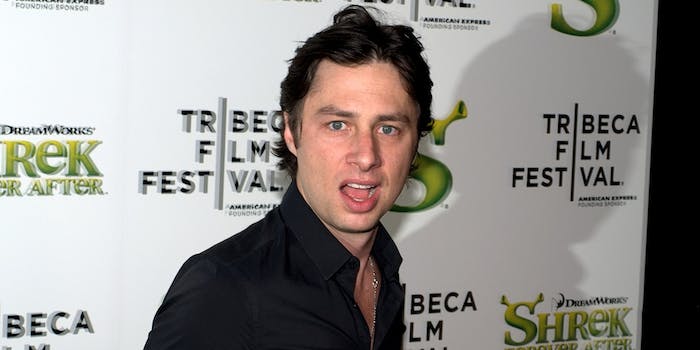 Zach Braff just gave this superfan the biggest compliment ever

Try not to blush.

While he may not have gotten a lot of love from the Internet for successfully Kickstarting his movie Wish I Was Here, Zach Braff still manages to charm his fans in other ways.

First, he helped a man propose to his wife. Now, he is personally addressing someone known as Mattias, one of his longtime fans. Braff not only thanks Mattias for his patronage, but goes on to tell him, “you’re the reason I’ve done everything I’ve ever done in my life.”

Mattias, who goes by the handle matterohme on Reddit, posted his personalized greeting from Braff to r/videos on July 21, explaining that “my friend ended up in a car with Zach Braff … you should see my smile.”

Some of Mattias’ fellow redditors were just as touched by the Scrubs star’s message.

“Zach Braff is one of the nicest freaking humans on the entire freaking planet,” redditor Guinness_or_thirsty said.

Others poked fun at the uncomfortable look Braff seemed to have throughout the greeting.

“I realize he is just being super serious, but it kind of also looks like he’s saying this at gunpoint,” redditor obilankenobi1138 said.

Hopefully, the eventual in-person meeting between Braff and Mattias will also be documented for YouTube. Let’s just pray whoever shot this video learns about the hellscape that is vertical video before that happens.