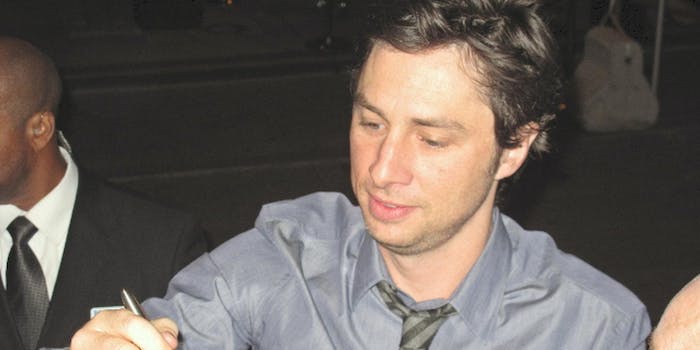 Once again, the Garden State writer/director is facing negative coverage of his crowdfunding project, this time because The Hollywood Reporter accused him of accepting funds from traditional sources.

No, Zach Braff did not take any money from traditional financiers to fund his upcoming film.

On Wednesday, The Hollywood Reporter published a now-scrubbed article claiming that Braff had obtained significant financing from Worldview Entertainment for Wish I Was Here, the actor’s second directorial effort and a film that made headlines in April after Braff took to Kickstarter to raise $2 million. So far, the campaign has netted more than $2.6 million from nearly 39,000 backers.

The trade publication alleged that Worldview Entertainment was going to provide the bulk of a supposed $10 million budget.

These allegations, however, were quickly dismissed by Braff himself, who wrote a lengthy rebuttal in a Kickstarter update.

“The story out there about the movie being fully funded by some financier is wrong,” he stated.

“I have said on here and in every interview I’ve done on this project that the film would be fully financed from 3 sources: [m]y Kickstarter Backers, [m]y own money, [and] Pre-Selling foreign theatrical distribution.”

These three would eventually constitute a budget between $5 million and $6 million.

“When you pre-sell foreign distribution, you don’t get that money for some time. So you need to go to a company to provide something called ‘Gap Financing,'” the director/actor explained.

“They are essentially a bank. Loaning us the ‘gap’ between what we’ve raised together and what we need to actually make the movie.”

This was also confirmed by Variety—a rival to The Hollywood Reporter—on Wednesday afternoon.

“Because the film is scheduled to begin shooting in August, the production won’t have enough time to get bank loans against foreign pre-sale letters,” explained Andrew Wallenstein, editor-in-chief of Variety‘s digital property.

“Worldview essentially backstops those loans, supplementing the dollars raised on Kickstarter, which currently amounts to $2.6 million, and an unspecified sum Braff himself has ponied up.”

This incident is the second time Braff has gotten bad publicity since launching his Kickstarter campaign. On May 7, famed comedy writer Ken Levine wrote a post explaining that he was not going to contribute to Wish I Were Here because it was taking money away from other worthy projects, a sentiment shared by many of Braff’s detractors. That assertion was shot down by Kickstarter itself, whick revealed data that showed that big-name projects like Wish I Was Here and the Veronica Mars movie actually brought tens of thousands of new users to the crowdfunding platform. These newcomers would go on to pledge more than $400,000 to 2,200 other projects.