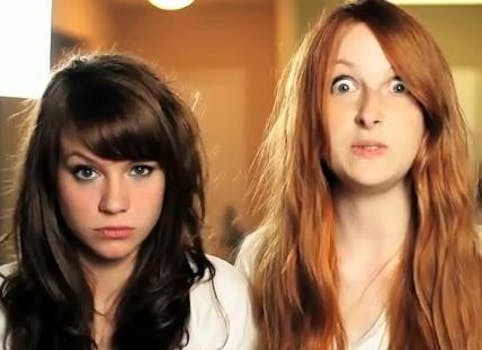 YouTubers break out of video and pop in person

The computer screen is just too small for these outsized YouTube personalities.

The Internet is just too small for YouTubers these days.

More and more of them are breaking into mainstream through television deals, late-night  interviews and cameos. And, they’re even taking to the road and going on national tours.

The latest YouTube tour, called the Dial Up Tour, features YouTubers Tessa (aka Meekakitty) along with her partner-in-crime Shawna (aka Nanalew); Mitchell Davis and Kyle Sibert of LiveLavaLive; and Jason Munday together with Alex Carpenter.

“It will be a one of a kind live concert setting, with elements of stand-up comedy, skits, Q&A sessions, music and more,” wrote Eileen Grennen, the assistant manager at AKT Enterprises, in an e-mail to the Daily Dot. (AKT Enterprises represents Mitchell Davis and Kyle Sibert of LiveLavaLive.)

Meekakitty announced the tour on her YouTube channel on Nov 18, and the video has since gathered more than 100,000 views.

“Because when the Internet is too slow, we come to you” she says, after jokingly expressing anxiety over the large venues.

“So grab your YouTube friends and your real life friends (hah, good one), and get there in time for the show!”

Meekakitty, a YouTuber since 2006, is known for her wacky sense of humor and awkward comedic skits—and for her bright reddish-orange hair.

In Nanalew’s video announcement of the tour, she promises their joint act will “have way fewer stolen jokes” than normal, and asks her viewers, “Would it help you come to our show if I threatened your family?”

The six YouTubers going on tour have long enjoyed a virtual friendship via YouTube, so it is only natural that the group would perform together.

“Mitchell & Kyle always want to be able to interact with their viewers in real life and they know not everyone can travel to the big conferences throughout the year” said Grennen, who added the duo did a week-long sold out tour in the southwest last year.

“It was only a matter of time until they were itching to get back out on the road again, this time for a national tour.”

Earlier this year, The Gregory Brothers, known for their “AutoTune the News” and viral video songifications, went on a national musical tour with other YouTubers, dubbed the DigiTour.

And most recently, a group of YouTubers known as YTF, flew to Hawaii to perform a sold-out variety act for one night, just because they could.