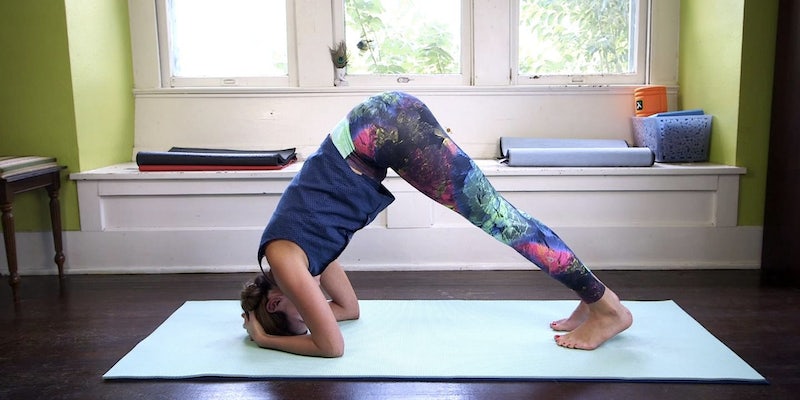 When Adriene Mishler made her first yoga video for YouTube, the mantra of the day was “find what feels good.” Two years later, that mantra has become the center of Yoga With Adriene, a thriving business with a global online community, premium content, and, of course, free YouTube videos generating thousands of hits online.

“If you had asked me two years ago if I would ever have an online yoga community or a YouTube channel on yoga, I probably would have giggled,” Mishler told the Daily Dot. “I am still so blown away by the impact and connection that is possible through the YouTube platform.”

Mishler is part of a growing number of yoga teachers going “Namas-digital.” Instead of taking the traditional route of teaching at the YMCA or opening a studio and hoping for the best, they’re hosting YouTube channels with free content. Just search the word “yoga,” and you’ll find a huge list of videos from Mishler, Tara Stiles, YogaYak, and others. It’s yoga for a digital generation, where you can “find what feels good” on your own terms.

“My goal is to help people feel better, become clear, confident, healthy and radiant, so they can go out into the world and affect positive change,” Stiles wrote on her blog. “Is yoga a good tool, absolutely. Am I an agent for expanding traditional yoga, whatever that means in 2014, absolutely not.”

According to Yoga With Adriene student Alexandra Paredes, doing yoga videos from YouTube is better than just buying a DVD. The teachers put out fresh content on a regular basis; invite comments, questions, and suggestions; and give their students a better connection to their teachers, even from thousands of miles away.

“She tells you how it feels and how to do it. You’re not left blind, so I feel like I can do it at home,” Paredes said in an interview.

Mishler said teaching yoga through a laptop rather than in a classroom can be unusual, but the basic principles are the same. She and producer Christopher Sharpe try to create a comfortable environment with a mat, some sunlight, and just one or two camera angles, rather than something big and flashy with quick cuts and expensive lighting. She said it’s important to make sure the person at home feels like they’re a part of the experience, rather than just watching something from a distance.

“We both agreed that it was important to keep the videos simple and homemade, and to consider what the person on the other end is experiencing—on the mat and not just at the computer,” Mishler said.

“My goal is for the production to be invisible,” Sharpe added.

Still, there are challenges to practicing YouTube yoga, although Mishler calls them “differences” instead of difficulties. She said doing yoga at home is convenient, but that “there is nothing like practicing with other living [people].” Even Paredes said she sometimes has a hard time making sure she’s holding a pose the right way, although she added that there’s really no “wrong” way to do yoga.

“Sometimes I feel like I don’t know if I’m doing it right,” Paredes said. “[But] I feel it in my muscles, and if it feels like it hurts or it feels like that’s not right, then I kind of fix from there.”

What Paredes said she loves most about YouTube yoga is the online community that comes with it. Yoga teachers like Mishler and Stiles have created large global groups through their websites and Facebook groups. Paredes said the online community is what makes YouTube yoga such a valuable experience for her. She said even though many of them have never met before, and probably never will, everyone participating is there to support one another. She said it’s become a close-knit group of people sharing in the same experience of learning yoga online.

“It’s inspirational, because I’ve had times where I beat myself up or I don’t think I’m actually doing good or seeing progress. But it’s so nice to hear that other people feel the same at times,” Paredes said. “Seeing everyone’s progress is beautiful. It’s beautiful to be a part of everybody’s life. I’ve gotten so many new friends, and I’ve joined a family.”

Even though the videos are free, both Mishler and Stiles have created lucrative businesses with side projects. Each has introduced her own brand of yoga videos that can be bought and taken offline. Stiles has Strala yoga with its own studio in New York City, while Mishler has released two month-long yoga video series: Reboot is available to the public, while Empower is still in limited release.

“Ultimately, they are my version of ‘yoga bootcamp,’ which is a huge request from our viewers,” Mishler said. “People want to be held accountable; they want to go deeper.”

Mishler said she and Sharpe plan to continue releasing yoga videos on YouTube, but that they’re expanding with more premium content and tours to cities like Los Angeles and New York, where groups who met online through Yoga With Adriene have started meeting in person as well. She said YouTube has helped her and other yoga teachers reach an audience they never could before, and that’s turned a personal experience into an international one.

“In addition to YouTube allowing us to grow the family around the globe, it also is allowing us to actually provide free yoga to all,” Mishler said. “I think that creating and cultivating a home practice is all about self love and can truly be empowering. … Through the community and lifestyle aspect of the channel, I hope that we are able to connect globally and inspire one another to get on the mat.”

Screengrab via Yoga With Adriene/YouTube