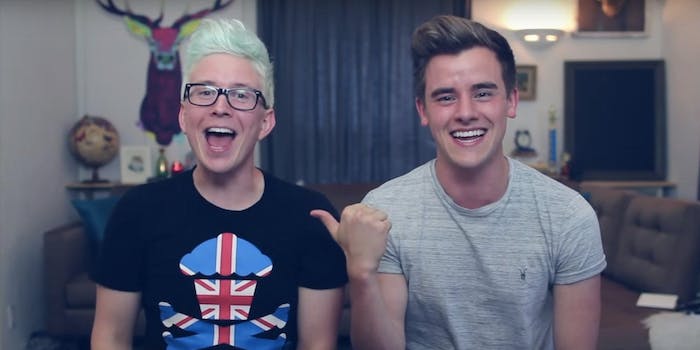 An E! writer said she felt old for not knowing YouTube and Vine stars popular with teens.

Do not mess with #TeamInternet.

E! Online is learning that the hard way today on social media, as prominent YouTubers respond to an article about this weekend’s Teen Choice Awards in an all-out battle between old media and new.

It all started with a post from E! Online about the weekend’s TCAs, which led with, “Okay, we just have one question: What was that?” The article goes on to talk about how the writer felt old watching the show and didn’t know who most of the stars mentioned at the awards show. Seija Rankin—who graduated from college in 2009, putting her outside the teen demographic for the show—complained about categories and YouTubers she didn’t even know existed, like Joey Graceffa and Felix Kjellberg (better known as PewDiePie).

5. There were entire categories that we didn’t even know existed. Choice Viner, really?

6. There were entire categories in which we’d never heard of the nominees. Eva Gutowski? Lele Pans? Joey Graceffa? Felix Kjellberg? Are those even real people?

YouTubers and their fans were quick to point out the flaws of E!’s post, especially since several YouTubers Rankin called out have higher viewership numbers than many of the E! Network’s shows.

if this "article" is representative of @eonline, I fear for the brand's future. https://t.co/3Q6RJuy1md

@tyleroakley @eonline I saw that. I mean how do you not know who 1/2 of those people are? Was it to be humorous or truly out of touch?

@shelbyy512 @eonline same it's so disappointing that one person made their brand look bad – I like a lot of things from E!

Literally why would you put this in an article lol it's just flat it rude and ignorant pic.twitter.com/TDty3evSet

E! Online began responding to the criticism with memes, including one citing its deal with YouTuber Grace Helbig, albeit without naming Helbig.

The reponse was swift, with YouTubers like Connor Franta calling the site out for its recent content.

.@eonline I do! That was a very progressive & intelligent decision for your brand. Your recent articles & tweets on the other hand, are not.

Rankin also fired back on Twitter about teens’ lack of understanding of sarcasm.

E! Online will be holding a Master Class in Sarcasm, and judging by Twitter post-Teen Choice Awards it seems like all of America needs it

In the last year, digital celebrities have become increasingly more prominent figures for teen audiences, with a Variety survey showing that YouTube stars are more recognizable to teen audiences than mainstream movie stars.

The E! article wasn’t only about YouTubers, though: It also called out more mainstream acts like Little Mix, as well as the tendency for (presumably) teen attendees to bare a lot of skin on the red carpet. Little Mix fans also called out the hypocrisy of the article combined with E’s coverage.

@eonline In the article it says they don't know Little Mix but they had an interview with them on E! News

As YouTubers strive to achieve legitimacy on mainstream platforms—including Helbig on E!—a misstep like this one only further drives a wedge between old media and new.

Give us ALL the clicks.

Update 1:37pm CT, Aug. 18: E! host and prominent YouTuber Grace Helbig chimed in to take a side on the debate late Monday night.

This is embarrassing, @eonline. https://t.co/Agia73nCxF