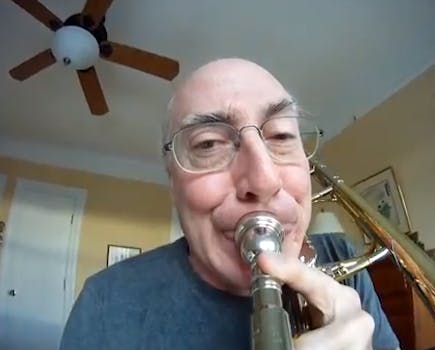 The big clip on the Internet today comes from a YouTuber who stuck a camera on the slide of his trombone and went to town on a two-minute improvisation. The result is summed up perfectly in the video’s title: It’s “Trombone Silliness” at its finest.

Australian Adrian Van Oyen decided to get over his breakup with a girlfriend by trying 100 of the cheesiest pickup lines that a man could ever try on a girl he’d previously never met. Not surprisingly, he’s largely unsuccessful.

3) Geek and Sundry, “A Sneak Peek at LearningTown”

Only eight more days remain until Geek & Sundry premieres Paul and Storm’s new crazy sketch comedy show LearningTown, and the network’s getting ready by offering a teaser of what to expect. Judging by the the way that “Sausage Party” shakes out, viewers should get ready for a healthy dose of hilarity, insensitivity, and characters that look like they could be extras on the Muppets.

Remember when you were 2 years old and your dad told you to recite the “Peter Piper picked a peck of pickled peppers” line over and over until you got it right? Now you can see how cute it was, thanks to YouTuber MarkJinksDub and his daughter Ada.

“Bears are wild animals, and honestly, there’s still a lot we don’t know about them.” So what can you do to protect yourself should you run into one on a hike? The funny folks at Upright Citizens Brigade have all your answers.