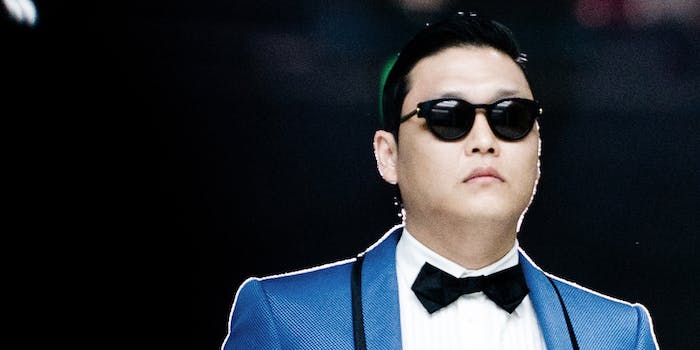 To no one's surprise, "What Does the Fox Say?" is the viral video of the year.

When the world ends, it will just be cockroaches and a beloved Korean pop sensation in a bow tie. At least, according to YouTube’s 2013 rankings.

YouTube has released YouTube Rewind 2013, a compilation of its top videos for 2013. The winner for top music video is Psy’s “Gentleman,” the Korean sensation’s followup to 2012’s “Gangnam Style.” The top trending video was, of course, Ylvis’s “What Does The Fox Say?” Meanwhile, Steve Kardynal’s hilarious Chatroulette cover of Miley Cyrus’ “Wrecking Ball” was the most popular parody video of the year.

There were also 1.7 million videos of or about the Harlem Shake uploaded to YouTube this year, “ranging from a squad in the Norwegian Army to NASCAR’s Jimmie Johnson after winning the Daytona 500,” YouTube reported. Harlem Shake videos were watched more than 2.5 billion times, and “harlem shake” was the top rising search on YouTube in 2013.

YouTube’s top 10 trending videos had 850 million views between them and the top 20 channels racked up 18.7 billion views.

As evidenced by the reigns of Psy and Ylvis, more than 80 percent of the top videos this year came from outside the United States. Here are the complete top 5 lists for 2013:

3) How Animals Eat Their Food, MisterEpicMann

Channels That Grew The Most In 2013