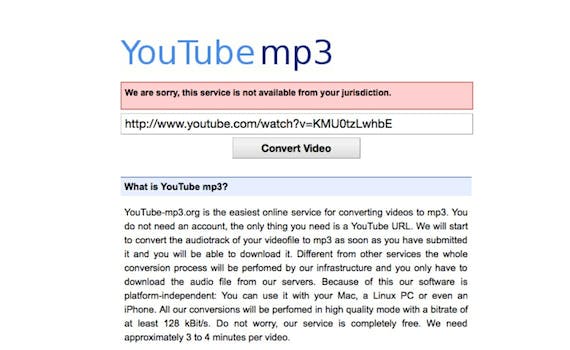 It's a major victory for the RIAA.

The Recording Industry Association Of America (RIAA) and some of the labels it represents are looking to crack down on so-called “stream-ripping sites,” which let users convert videos from sites like YouTube into the mp3 audio format. While that fight is far from over, the RIAA and its cohorts just won a major victory. They have agreed to a settlement with YouTube-MP3, a major stream-ripping site that will be shut down as a result of the legal agreement.

YouTube-MP3, based out of Germany, was described as the most popular stream-ripping site on the web when the recording industry first filed a suit against it last year. “Tens or even hundreds of millions of tracks are illegally copied and distributed by stream-ripping services each month,” read the text of the suit, whose plaintiffs included “Big Three” labels Universal, Warner, and Sony. A study released around the same time found that nearly half of all internet users between ages 16 and 24 used a stream-ripping service at least once over a stated six-month period.

Music videos are common targets for stream rippers, since the resulting mp3 can easily be added to an external device. With that in mind, the RIAA’s desire to cut down these sites is understandable, and in reaching a settlement, the suing labels found themselves to be on strong legal footing. While the exact financial terms of the deal aren’t known, YouTube-MP3 is reportedly taking all responsibility for the copyright infringement that has occurred on its platform. “Through the promise of illicit delivery of free music, Defendants have attracted millions of users to the YTMP3 website, which in turn generates advertising revenues for Defendants,” reads of the court documents.

With YouTube-MP3 in the recording industry’s hands, it is now useless as a stream-ripping tool. Of course, we’re talking about the internet here, which means there are still dozens of other ripping clients that can be found with a simple Google search. Perhaps those sites will soon find themselves in the RIAA’s crosshairs, too.