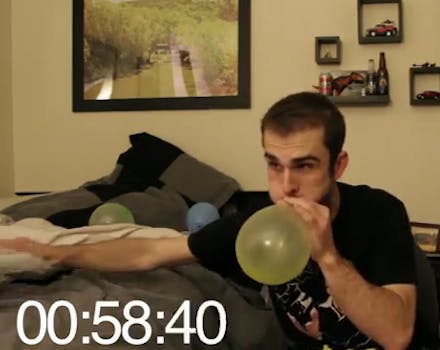 YouTube's 95Camry4Life has approximately two to four minutes to complete the challenges he sets for himself while his neighbors get it on.

If you regularly hear your neighbors having violent, wheezing intercourse through your thin apartment walls, you’re left with a few options. Should you invest in some earplugs, politely confront them, or passive aggressively set up a YouTube channel about it?

For 26-year-old Ryan aka 95Camry4Life, the choice was clear. Last week, the Californian began posting videos in a series he calls the Thin Wall Challenge. Each time he hears something going on next door, he attempts to complete a random task before his neighbors finish the deed.

So far, he’s made two videos. In the first, Ryan attempts to blow up as many balloons as possible before his neighbors finish. His neighbors give him nearly two minutes to attempt the challenge.

In the latest entry, Ryan ups the ante. He attempts to flip 5 quarters in a cup before his neighbors are done—and threatens to tase himself if he can’t meet the deadline. His neighbors give him nearly four minutes this time, but can he do it? Watch and see.

In each video, the noises coming from next door are so powerfully loud that one commenter has suggested the series is a fake.

Ryan hasn’t responded. But that’s not to say he isn’t active in the comments. When asked, Ryan said he has yet to meet his neighbors but “hopefully one day” he will.

We’ve got plenty of questions for Ryan ourselves, but the video blogger has yet to respond to our messages. What will his next challenge be? Has he sent a noise complaint to the apartment manager? And how do they sprint to the shower so darn quickly after they finish up?

Already, one commenter named laxchick1519 has vocalized our most burning question:

“How long before the neighbors realize whats going on?”