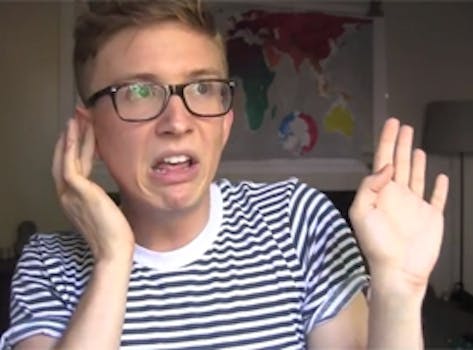 Rhett and Link, Daily Grace, Tyler Oakley and more asked their fans to sing a single note for as long as possible. Whose team will come out on top?

Tyler Oakley may be in last place right now when it comes to note-holding, but he’s got a whole month to wail his way to #1 in the 2012 Supernote Challenge.

The popular singing sensation joined various YouTube celebs, including Daily Grace and Rhett and Link, in sounding the call today for fans to pick a team and join in the bi-annual vlogging competition. The goal? Pick a participating team headed up by a noted vlogger, then record yourself holding a note for as long as you can. The team with the most collective long notes held wins.

Is it a time-waster? A genius viral vid ploy? A chance to goof off in public? Maybe all of the above. The Supernote challenge started in 2008 when Rhett and Link, singers and “internetainers” who take their music challenges very seriously, put out a call to see “who on YouTube can hold it the longest.”

Since then the competition’s been held every 2 years during the month of October. Last year’s competition turned out 2500 YouTube videos in the first 24 hours alone, and 6500 videos overall. Among the list of vloggers participating in this year’s challenge are Felicia Day, Lamar Wilson, Justine Ezarik (ijustine), Dan of danisnotonfire, Peter Shukoff (nicepeter), and Phillip DeFranco’s SourceFed.

Needless to say, the pressure is on. It’s only day 1, and teams are playing dirty, with Oakley’s YouTube plea including a promise to Twitter and Tumblr stalk anyone who participates. (His promo, in which he dubs his team Team Fangirl, already has over 800 notes on Tumblr.)

Oakley told the Dot he plans to use the project as a way to foster community good will:

I’ve been on YouTube for 5 years now, so I’ve seen the past two Supernote competitions take place… and always dreamed of being one of those YouTubers picked by Rhett and Link to be captains – so when they contacted me to see if I was interested in being a captain this year, I was FLOORED – and immediately said yes!

I’m really excited for #TeamFangirl, because – more than anything – it’s a chance for me to really see who watches my videos and to give them a moment in the spotlight. The people who watch me are always sharing my videos, and this feels like a chance for me to not only get to know them, but to also show them off and promote them. I’m so excited!

The challenge runs through the end of October. The winner of the Supernote competition may or may not receive a really ugly trophy, but they will receive lots of glory in the form of hits, reblogs, answering videos, and, of course, thousands of Johnny One Notes taking to YouTube to embrace the art of singing.

Or at least to embrace the art of holding one’s breath.