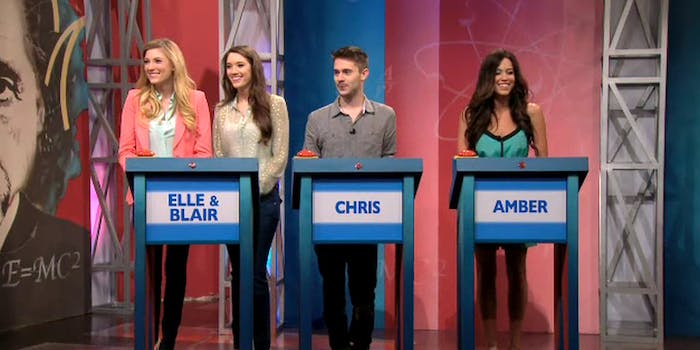 If we learned one thing from watching The Tonight Show with Jay Leno, it’s that some YouTube stars should stick to making videos and not answering questions.

Leno hosted YouTube-famous stars Chris “Leave Britney Alone” Crocker, Amber Lee Ettinger (“Obama Girl”), and Elle and Blair Fowler (i.e. the “haul girls”) on Tuesday night’s show, and it went as well as you would expect for people who got famous for doing nothing.

We learned that the Fowler girls thought former Republican hopeful Rick Santorum was Steve Jobs, Ettinger believed that Alaska was bought from the United States by Sarah Palin, and Crocker said the captain in Moby Dick was named “Captain Dick.”

They did get some questions correct, though! The Fowler girls correctly answered the year John F. Kennedy died (1963) to their surprise. And, after a few tries, Ettinger got Kennedy killer’s name right.

But that didn’t last long. The end of the segment dissolved into disaster when none of them could name the Show Me State. “Chicago,” chirped in Ettinger. After a clue that the state began with an M, the contestants answered every state and, by process of elimination, Crocker got it right by answering Missouri.

The segment is split in two parts, but it becomes cringe-worthy to watch after Crocker said that the Gaza Strip is in West Hollywood. Their parents must be so proud.

We’ve embedded the two videos below if you want to feel smart.