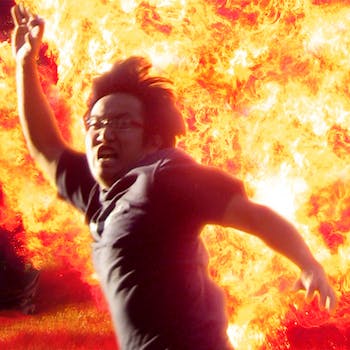 But he saved the discussion for elsewhere.

“Facebook’s commenting system is terrible,” Wong, who’s known online as freddiew, wrote on his Facebook page. “I’m answering questions over on Reddit instead”

Wong is hardly the first celebrity to grace Reddit. In fact, celebrity interviews are a near monthly occurrence over at the site’s question and answer section, IAmA (“I Am A”).

But those sessions are usually one-off affairs, and also pretty blatant marketing ploys. Wong, on the other hand, shows that the best, long-term exposure on Reddit not to make a ploy of it at all.

It’s to be a living, breathing, commenting member of the community.

The independent film maker has has been a big contributor on Reddit over the past two years, gathering over 15,000  comment and link karma — the site’s internal system for rewarding quality submissions.

Those are hardly power-user numbers, but they’re big enough to show any redditor that Wong is the real deal — a heavy contributor to the site.

Wong posted his latest short film yesterday. The video is a promotion for the upcoming Cowboys & Aliens movie, and is a collaboration with that film’s director, Jon Favreau.
.
Wong’s post quickly shot to the top of the site’s video section with over 4,500 upvotes. He immediately began responding to questions.

These ranged from inquiries about the cameras he used, to the kind of person Jon Favreau is to work with  (“he’s a very cool guy,” Wong said), to technical questions about video software.

He even took a dig at Hollywood.

“Do you ever plan on giving Hollywood a shot? Or do you think you will still be happy making youtube videos in 5 years?” asked one redditor.

Wong replied, in part: “It might be easier for us to make it online and put it out online than having to deal with the mess of middlemen that Hollywood essentially is.”

Wong seems to be taking that same distaste for Hollywood’s mess of middlemen to his marketing.

Why pay a big public relations firm, after all, when you can just shoot the breeze with your fans — for free — on Reddit?