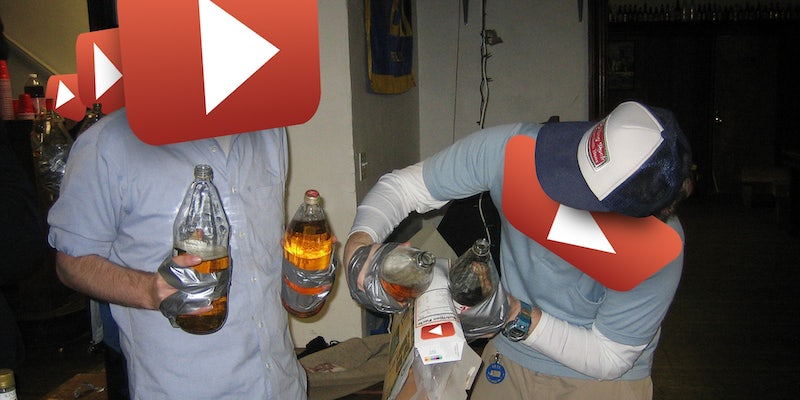 It’s been pointed out that YouTube has a “creep problem,” and eradicating this overgrowth isn't going to be easy.

In the span of a couple weeks, YouTube personality Sam Pepper went from being a popular U.K. vlogger to being persona non grata in the community. He’s facing multiple allegations of sexual harassment and rape, which started pouring in after he posted a video in which he covertly grabbed women’s butts. Soon after, multiple allegations against another popular YouTuber, Jason Viohni, came to light.

The two joined a growing list of YouTube personalities who’ve been accused of or admitted to sexual misconduct with fans. Pepper, who specializes in “prank” videos—a popular subculture on YouTube—later said the video was just a “social experiment.”

It’s been pointed out that YouTube has a “creep problem,” and eradicating this overgrowth isn’t going to be easy. A spokesperson from YouTube explained that “YouTube’s community guidelines prohibit inappropriate content such as harassment. YouTube removes content that violates these policies when flagged by our users.” The site’s harassment and cyberbullying guidelines outline the various scenarios for flagging or reporting a video, and every video that’s flagged gets reviewed. Pepper’s video was removed as “a violation of YouTube’s policy on nudity or sexual content,” and he was subsequently dropped from his multichannel network, Collective Digital Studio.

Pepper and Viohni’s circles often intersect with pickup artist channels, built on the bravado of vaguely college-aged guys claiming they can help other guys pick up women. In many of these videos, though, picking up women is less about confidence and skill, and more about tricks— specifically tricking women into doing whatever the host wants. These channels have thousands, sometimes millions of followers, and the videos receive a proportionally astronomical number of hits. Prank and pickup videos attract the same type of followers, and their content has started to overlap.

In a perfect world, banning prank and pickup channels from YouTube would be an ideal solution, but it’s tricky: Those subscribers and clicks make ad money for YouTube, and those channels often get brand endorsements. Many have claimed that the women in the pickup videos are actually actors, but that doesn’t absolve the men from being creeps.

In her video response to the Sam Pepper video and the subsequent allegations, vlogger Laci Green explored this toxic subculture. Among others, she singled out popular pickup artist channel Simple Pickup, which has more than 1 million followers across two channels, as being one of the worst offenders.

About a year ago, Simple Pickup—three guys who go by Jesse, Kong, and Jason—posted a video in which they motorboated women for breast cancer research awareness, donating $20 to the Breast Cancer Research Foundation for every woman who let them do it. After the foundation learned of the nature of the fundraiser, the donation was returned. Simple Pickup’s fans blamed radical feminists and “haters” for it backfiring. Kong claimed in a response video that their critics were “completely out of line.”

In a video from 2011, the guys pretended to be gay to pick up girls. As they distractedly engage with the women, they ask one if she spits or swallows. They ask another if she likes her face getting “jizzed” on. Early on in the video, one jokes, “Are you trying to get raped? Because I’m down to rape you if you’re down to get raped. Kidding! I’m not gonna rape you… yet.”

“How to Be a Good Wingman” is a March 2011 video in which Kong explains how to avoid the scourge of the “cockblock” by having your best bro by your side: “I do everything in my power to make sure that their penis ends up in a girl’s mouth, vagina, butthole, or whatever hole they’re into, and as you can see, it usually ends up very well.”

– Earlier this year, popular YouTuber Vitaly Zdorovetskiy posted a video in which he pretends to show women his penis in public, and disguises it as a “magic trick.”

– Last year, Norwegian YouTuber Freddy Fairhair approached women on the street naked, often with an erection, in an attempt at seduction.

– Whatever also markets their pranks and pickups as “social experiments.” One video from 2013 features men literally picking women up off their feet without their consent. They also have a video called “Picking Up Girls with a Boner.”

– SimpleSexyStupid often collaborates with Simple Pickup. They have a video called “Slapping 100 Girls’ Butts.” In fact, there are a disturbing number of “prank” videos devoted to grabbing or slapping a woman’s ass.

– The channel JinkiesTV is heavy on “hot girl” pranks. One video employs the “thumb war” game in an effort to kiss girls on the beach. The host, Chris, a.k.a Prank Invasion, somehow always wins the game, so he always gets to kiss the girls. At one point in the video, we see a woman on her knees unbuttoning his pants on the beach, because he won, apparently. Prank Invasion also markets videos as “social experiments.”

– SoFloAntonio, a cohort of Prank Invasion, uses the magic trick front to try to get women to flash him on camera. A video from July, also marketed as a “social experiment,” is titled “Drugging Girls in Public.”

– Overboard Humor uses the “social experiment” excuse to grope women or harass them into showing their breasts.

– Troll Munchies tried to “teabag” women on the street. The joke: It’s an actual teabag! Not everyone they approached appreciated the “joke” because not everyone is a 14-year-old boy.

– LAHWF’s “Trying to Kiss Girls” video (another “collaboration” with Simple Pickup) features several men attempting to kiss women without their consent. They have other videos where they try the same tactic.

That so many fans of these channels are teenage or college-aged men is equally troubling. Colleges are finally having to step up and address an unchecked sexual assault problem, and consent is at the center of the discussion. (Of course, startups are now trying to edge in and “fix” the consent “problem.”) Young men raised on the Internet turn to the Internet for help with dating and self-esteem, and this is what they see as acceptable behavior. Harassing or degrading a woman on camera is OK if it’s a “social experiment.”

The guys in these videos all have some variation of the same look and the same charm-free approach and juvenile sense of humor. There’s not a lot of insightful dialogue, but there’s the chance a woman will be asked if she spits or swallows, and you might see her butt. But these videos aren’t social experiments; those usually yield some knowledge or insight.

Prank and pickup culture has flourished on YouTube, but that same toxic culture of entitlement, narcissism, and misogyny can be found in nearly every online space. You could certainly draw parallels to other recent events online: Ed Champion bullying and threatening women on Twitter, the misogynist saga of Gamergate, the privacy-hacking of Celebgate. Women were targets there, too, and accountability was often lacking or nonexistent.

YouTube was also recently called out by popular volgger Franchesca Ramsey for letting racist humor slide; the prank subculture has no shortage of videos in which white guys go into the “hood” to play pranks on black people.

But there’s been a signal boost, and so many more women are speaking up. Musician and vlogger Lizzie Howard recently posted a video about Ed Blann (a.k.a. Eddplant) and Alex Day attempting to make comebacks after they faced allegations of sexual abuse and continuing to use social media under different names. “I’m just frightened that these people are suddenly going to have an online presence again,” she explained in the video, “after they gave up that right through their actions.”

“I think a way of getting rid of it is talking about it,” Howard told the Daily Dot. “Because, as it has been established, people hear rumours about these things and they get swept under the carpet, and therefore, the abusers get away with their crime. However, if we continue talking about it as an issue on YouTube and in other communities and industries, then we can educate people about consent, about what is and isn’t right, and about why sexual abuse (or abusing a fan from a position of power) is not tolerable.”

“The Sam Pepper situation has really sparked a level of acknowledgement, discussion, and condemnation from prominent YouTubers that hasn’t been there during similar issues over the past year,” she explained. “I’m finally starting to see videos on the subject from larger-name creators. I’m finally starting to see the outrage on their end that the rest of us have been feeling and voicing for months/years now. Hopefully this collective outrage will continue to endure and act as a catalyst for real change.”

She adds that YouTube has to step up its accountability as well:

“YouTube as a business taking a firm stand against this sort of behavior from users and partners would be a huge stepping stone in reducing this vile behavior. Ideally, they should shut down or at least disable monetization for the channels of people who have used their position on the platform to abuse and harass people, but I understand that may not be feasible without hard evidence or convictions. So for now, my biggest wish is that they would give us the tools to push back against harmful and misogynistic content as much as we can.”

And, as Howard said in her video, we have to keep talking about it.

Update 12:38pm Oct. 6: A YouTube spokesperson told the Daily Dot: “We have strong guidelines regarding advertising on the site, and we may choose to stop placing ads against any video if we receive advertiser complaints or determine that the content of the video is inappropriate for our advertising partners.” Both Pepper and Viohni’s accounts have been demonetized and their partnerships with YouTube suspended.

Photo via Andrew Rotto/Flickr (CC BY 2.0) | Remix by Jason Reed