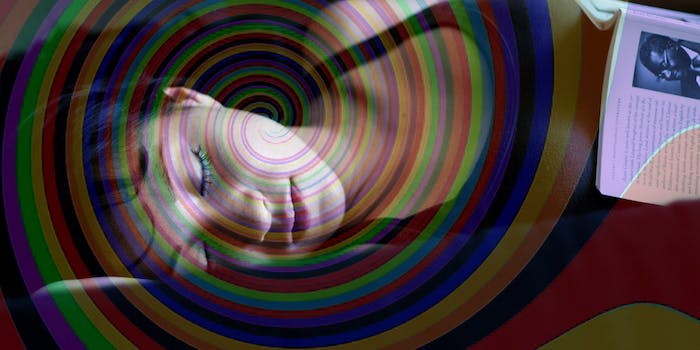 I let a YouTube sleep hypnotist talk me into lucid dreaming

On my first attempt at lucid dreaming, I had a dream that I was tweeting. The horror.

I ran my hand along the polished green marble wall, then looked up and saw a full moon, a milky white eye that illuminated every crack in the floor. There was no door in this room, but the moon somehow elevated me. Then I was outside, walking along a moonlit path. I looked up at a tree, which was draped with brown and white fur. I attempted to touch it, and woke up to my cat staring at me.

I’d fallen asleep listening to Jody Whiteley’s lucid dreaming tutorial on her YouTube channel, which focuses on sleep hypnosis and guided meditation. On my first attempt at lucid dreaming, I had a dream that I was tweeting. I’d expected something like the opening dream sequence of 8½. Was I really lucid tweeting?

Over the last three years, Whiteley, who’s based in Canada, has been producing and uploading videos to her popular channel, where she’s collected more than 55,000 subscribers. One of her bios reads, “YouTube sleep hypnotist and attempted comedian.”

“I do slip little jokes in,” she says in the same calming voice that narrates her videos. “I have a hard time not doing that. I have a sense of humor, and I like to tell jokes, but it doesn’t always go over very well, so it’s not like I’ve tried to do standup. Every once in a while, I get lucky and it works.”

Whiteley started posting videos after seeing her three teenage children on YouTube. She says eventually, while they were at school, she started looking up videos.

“At the time I was very ill,” she explains. “I started listening to stuff to make me feel better. And I found that some people, if you listen to them, they help you fall asleep, and I had problems with my sleep. And then there were recordings I wanted to hear, but they weren’t on there, so I started making my own recordings, and people seemed to like that.”

In the beginning, she had a cracked microphone and didn’t know how to record, so she streamed live onto YouTube. She admits she didn’t know what she was doing.

Yet she become a content creator. Viewers would ask for certain concepts or videos, and she began tailoring to their suggestions. Whiteley stresses, in videos and over the phone, that she is not a doctor and does not give medical advice. Her videos have a more personal origin.

“One of the reasons I was having trouble sleeping is I’m a sober alcoholic,” she says. “And when I quit drinking, I had to find a way to be able to fall asleep that did not involve taking pills, because we don’t want to go from one to another. So when I was in treatment, sleep was a hugely common problem.”

Whiteley adds that many addicts are “biochemically messed up after you drop your substance,” and found there are people who don’t want to have to take Ambien to fall asleep every night.

This might be why sleep hypnosis videos have become so popular on YouTube. Ultra Hypnosis, Lilian Eden, and the Honest Guys all specialize in hypnosis and guided meditation videos. YouTube star Lilium is part of a growing subset of “sleep whisperers,” who specialize in autonomous sensory meridian response (ASMR), which has been used to help with insomnia and anxiety.

Of course there are skeptics who tell Whiteley her videos don’t work, but she’s fine with them going elsewhere. She’s a proponent of lucid dreaming, in which a person is aware they are dreaming and, if they’re advanced enough, can control the parameters of their dream world. This isn’t a new concept, but it has enjoyed a resurgence in the past decade. In popular culture, lucid dreaming is perhaps most well-known from the film Inception. Director Christopher Nolan reportedly wrote the script based on his own experience with lucid dreaming.

The reality of lucid dreaming on a more mainstream scale might not be that far away. A recent study found that a group of psychologists in Frankfurt were able to give subjects the power of lucid dreaming via weak electrical currents applied to the scalp. Consider a future in which lucid dreaming happens on a mass scale: Our Twitter feeds could be replaced with live dream feeds.

“I think if you can face your fears that way, while you’re in your dreams, it’s good practice for real life,” Whiteley says. “You can look at something in your life and say, “OK, now this is getting scary. Something needs to be done about it.

“A lot of it is about high awareness. Sometimes when you reach a level of higher awareness, you’re not very happy about what it is you’ve just become aware of. Some people find they’re having nightmares. They may have been having them all along and just not been aware of it. So yeah, some people say, ‘This video gave me nightmares.’ But in my humble opinion, it might have been that they’ve always been having nightmares; they just didn’t know. The ones who stick around and work through that…One [person] said, ‘A man was chasing me with a knife, I was terrified, and I turned around and said that’s enough. This is my dream. And you are not allowed to be here.’

“And she turned him into a chicken.”

Before my cat interrupted, I hadn’t quite reached the chicken level of lucid dreaming, but I had experienced walking around a room, a stand-in for a part of my own subconscious. I’d joined the millions of people on YouTube exploring their own collective unconscious.