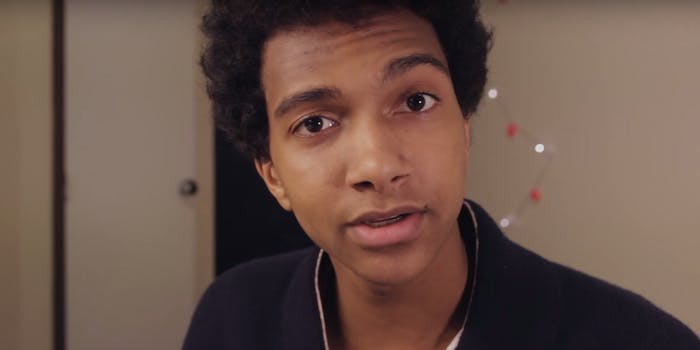 Little YouTuber Sam Saffold on diversity and the power of community

There’s a good chance you’ve never heard of U.K. vlogger Sam Saffold. Here's why you should.

There’s a good chance you’ve never heard of U.K. vlogger Sam Saffold. But the conversations this 19-year-old university student is having on his YouTube channel will ring a bell with anyone who cares about the platform and its growth.

Studying film in the hopes of becoming a director, 19-year-old Saffold has only been on YouTube for little over a year; he joined in 2014 after resolving to step outside his comfort zone. In his time online, Saffold has had more than just adventures, proving to be one of the most promising talents on YouTube. His secret? Using his lack of brand deals and millions of subs to spur uninhibited, honest conversations on race, ethnicity, and media’s relationship to both.

“Representation is something I’ve always noticed, even from a kid’s age,” said Saffold, whose racial background includes African-American, English, Indian, and Native American roots. “You watch things like Harry Potter and play it on the playground, and I never felt like I could play this character. There is this perception of everyone around you, the lack of representations makes you feel like an outsider.”

Originally inspired by MeowItsLucy’s video “Why Is My YouTube White?,” his June 2015 video “Why Is YouTube So White?” examines why there are so few creators of color being highlighted and given opportunities on YouTube.

“YouTube is fundamentally a media-sharing platform dominated by Western society.”

“YouTube is open to any race,” he states in his video. “There are plenty of people that are racial minorities who are making videos; I just think there is not as many as there could be because of the kind of YouTube ecosystem that we have. So why do I think YouTube is white? To put it simply, because all of Western media is, and YouTube is fundamentally a media-sharing platform dominated by Western society.”

He goes on to explain why setting white as the media default is detrimental to the mindset and advancement of other races seeking relatable representations.

“In a world where people with white skin are given more attention and more validity to their experiences offline, why would that not be reflected online?” Saffold explains. “As someone white, you’d feel more encouraged to make things on [YouTube] because you’d already had positive racial representation and you’d be given more attention because your traits are already what’s considered to be the norm.”

Increasing awareness to YouTube’s diverse creator community has been one of the largest online discussions of 2015. It all started after Akilah Hughes published her game-changing article “YouTube rarely promotes black creators, even during Black History Month.” In it, Hughes investigates why, on a platform publicized as being available to everyone, only 30 creators out of the top 500 are not white. The article spurred a video trend among creators around the world including MeowItsLucy, Chescaleigh, MarinaShutUp, and the ThirdPew, each of whom discussed the need for YouTube audiences to become more aware of the diverse communities often overlooked on the platform.

This year’s “Diversity on YouTube” Vidcon panel hosted by Chescaleigh gained mass attention as such prominent creators as Kingsley, Timothy DeLaGhetto, and JusReign explained their frustration of not receiving the same opportunities as white creators with half their number of subscribers.

With GloZell interviewing President Obama, Issa Rae opening her own studio, Todrick Hall starring in his own MTV show, and gamer KSI being one of the largest creators in the U.K., creators of color are as visible as ever, both on the platform and off. But the viewership and subscriber counts aren’t following suit, so now what?

As Saffold states, subscribing to a creator just because they’re a creator of color is not the answer. For many creators, being a person of color is one part of their identity but not necessarily the defining factor of who they are or what their channel is built upon.

“I never wanted to be somebody that spoke of race on YouTube or never thought I would be that person because I didn’t want that to be all I was capable of. But I realized being scared to talk because you’re afraid of being labeled is just as bad as not talking a subject at all. If I have an opinion on things I think I can make a good difference on, that’s something important to do,” Saffold told the Daily Dot.

Outside of fighting for a better YouTube, Sam is a movie-obsessed ZeFrank fanboy whose quick wit and hilarious tangents have gained him fans such as Jake Roper (VSauce3), MeowItsLucy, and Dodie Clark.

His videos range from vlogs about existential crises and demon horses to daily adventures and interviews with other creators. Before filming, Saffold says he writes out a script to decrease the number of tangents he can accumulate in one video; he then spends hours editing his videos before crossing his fingers and hoping his molasses Internet will upload his video in less than 10 hours.

Longtime YouTuber Leslie Datsis says of Saffold: “When you go back through Sam’s backlog of videos, it seems as if he found his natural video style pretty quickly. I don’t see that a lot in new-ish creators—they usually have to experiment a bit to find what’s best for them. But funny enough, his natural style isn’t anything tricky; it’s his genuine disposition mixed with his quick wit.”

For Sam, being in front of the camera isn’t about the fame or how many views a video can collect. Instead, he finds being a part of a growing community dedicated to creating compelling, experimental content the thing to drives him forward. “I was at the small YouTube panel at Summer in the City and it just felt like I was in a room full of people who were people, not people treating each other like numbers,” Saffold shared of so-called “Little YouTube.” “I’ll see the same [people] in the comments, talking to each other and conversing, and there is something supportive about that. I feel like [on] big YouTube, being you is cool and it’s inspirational to see people getting up to that level doing things that they love, but I don’t feel a sense of camaraderie.”

It’s creators like Sam Saffold that provide confidence in the next generation of YouTubers and remind us that even the tiniest voices, when used authentically, can cut across the mass of YouTube noise.