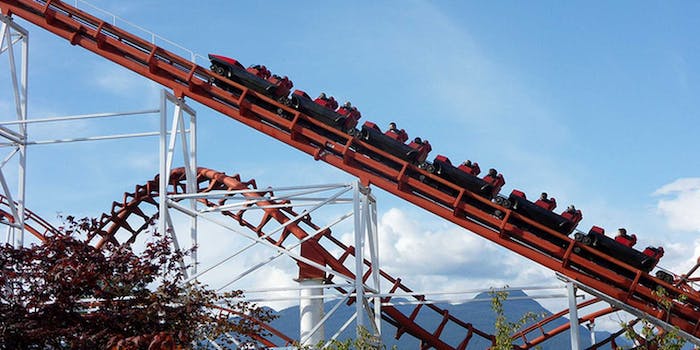 Buckle your seatbelts. Lower your harnesses into place. Keep your arms and legs inside at all times. Ready?

As the summer season approaches, traveling carnivals and amusement parks will once again open their doors to the annual influx of thrill-seekers. While many of the country’s amusement areas create lasting memories for their attendees, few people remember the many frustrations that accompany such trips until it is too late.

Expensive admission prices. Long lines that snake through boring queues in oppressive heat. Unexpected ride malfunctions. Ride operators who repeat the same thing over and over in the same exact tone of voice. Fellow riders with weak stomachs.

Thanks to YouTube, however, we now have a way to avoid these problems. Many people—and their cameras—braved the elements to shoot front-row perspectives of some of the best rides in the world. This summer, save a few bucks and let a maximized YouTube window deliver the chills of some of the world’s best roller coasters.

Kingda Ka is a steel roller coaster located at Six Flags Great Adventure in Jackson, New Jersey, a town almost equidistant to New York City and Philadelphia. When it opened in 2004, it broke several records and remains the world’s tallest coaster (standing at a mind-blowing 456 feet) as well as the coaster with the longest drop. It is rumored that the skylines of both New York City and Philadelphia can be seen from atop its hill on very clear days.

The Cyclone has been a staple of New York City’s historic Coney Island amusement park since 1927. It is one of the very few roller coasters that has been declared a National Historical Landmark and has been immortalized in media ranging from The Wiz to Grand Theft Auto IV. Experience the ride on one of the country’s most well-known roller coasters without the hassle of plane tickets or subway fares.

If the ride up and down the many hills of the Colossus roller coaster looks familiar, you aren’t imagining things. The coaster, located at Six Flags Magic Mountain in Valencia, California, has appeared in several popular movies and television shows. It is the roller coaster ridden by Chevy Chase, John Candy, and family in the closing scenes of National Lampoon’s Vacation and is also seen in the opening credits sequence of the ‘90s ABC sitcom Step by Step. The coaster dates back to 1978.

Most of the roller coasters featured on YouTube can actually be ridden. The Jet Star coaster, however, is an exception. The roller coaster, which was located on the edge of the Casino Pier in Seaside Heights, New Jersey, was swept into the Atlantic Ocean during Hurricane Sandy. Pictures of the coaster sitting upright in the waves became iconic images of the storm’s force and, in May 2013, the ride was completely demolished and removed. Today, it survives only in video format, its proximity to the water a frightening foreshadowing of its eventual fate.

Let’s travel internationally for a moment and visit the United Arab Emirates. The Middle Eastern country is home to Ferrari World, which boasts the Formula Rossa roller coaster. The ride holds the world record as the fastest roller coaster, clocking in at 149 MPH.

Our next international stop will take us to Fuji-Q Highland in Fujiyoshida, Japan. There, we will be riding Takabisha, which holds the world record for steepest roller coaster. It drops riders from its 141-foot initial hill at an angle of 121 degrees.

Back in the United States, we will visit perhaps one of its most beloved amusement parks that does not need a half-dozen flags to mark its territory. Space Mountain, located at Disney World in Orlando, Florida and also at Disneyland in Anaheim, California, it’s renowned for being an indoor roller coaster. Riders speed through the darkness, rounding a series of unexpected turns while being entertained by the occasional flash of light.

We’ll stay indoors for the time being and travel to a place that is just as heavily commercialized as any given Disney theme park: a shopping mall. The Spongebob Squarepants Rock Bottom Plunge is one of two coasters inside the massive Mall of America in Bloomington, Minnesota. Roller coaster riders are used to seeing other rides, the sun, and the insides of their eyelids while making their way through the many twists, turns, and drops. The Spongebob Squarepants Rock Bottom Plunge is also the only coaster we know of that offers a view of a mall food court.

Zoomerang, located at Lake Compounce in Bristol, Connecticut, is just one of many “boomerang”-style coasters scattered around the country’s amusement parks. The unique layout of such attractions causes riders to be pulled backwards up to the top of a hill. They are released and sent through a series of inversions, including a perfect loop. They again ascend the hill, reach the top, and are released. This time, they travel backwards—through the inversions again—before completing the ride.

Finally, we will take a ride on the Smiler, a brand-new coaster located at Alton Towers in Stafford, United Kingdom. The roller coaster holds the record for the greatest number of inversions and is the world’s second-leading inducer of vomit (Justin Bieber’s music still holds the top ranking in that category). YouTube lets you ride through the Smiler’s 14 inversions without having to stumble off to the nearest restroom line afterwards.

As an added bonus, we will disembark from our harnesses and crawl into the cage of the Zipper ride. A staple of many traveling carnivals, the Zipper is basically a ferris wheel driven to the brink of insanity. Its cages are flipped, flopped, and otherwise spun, leaving you with an intense dizziness and many inverted views of hastily-assembled amusements.