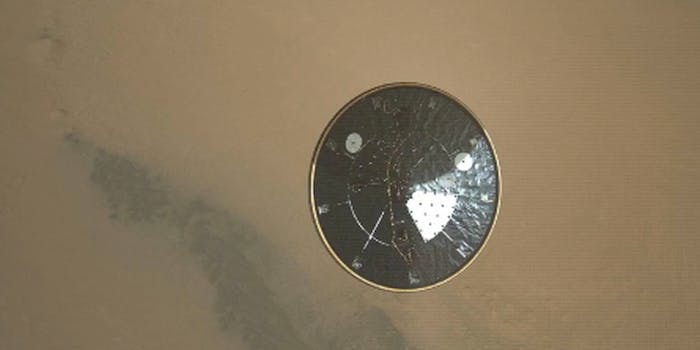 Curiosity landed just two weeks ago, and high-res images of its descent have already been turning into an amazing video.

Admit it: when the Curiosity rover sent back the first pictures from Mars, you were hoping it looked like a scene from Britney Spears’ Mars-themed video “Oops!…I Did It Again.”

So, the surface of Mars doesn’t feature a bodacious Spears bumping around in a red-tight outfit,but it’s still pretty cool. The first pictures captured by Curiosity reveal that the planet is barren, rocky, and with sandy terrain—and closely resembles an outskirt of Phoenix.

A three-minute time lapse video of Curiosity’s descent was uploaded to YouTube Sunday by Spaceflight101. The clip was created using high-resolution images from the rover’s Mars Descent Imager (MARDI), and runs at a shaky 4 frames per second. (That’s the best the editors could do, considering MARDI only captures one image every 3.95 seconds.)

This isn’t the first video of the Curiosity landing on Mars, but as Gizmodo notes, it’s certainly the best. Hopefully this will pique Spears’ interest in the planet and give her another reason to tweet at Mars Curiosity.