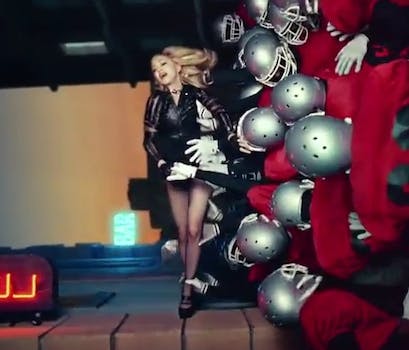 Gearing up for the Super Bowl, the divas unleash the big guns.

YouTube is abuzz today with the premieres of two music videos by big-name singers.

Madonna unveiled her new video “Give Me All Your Luvin’,” just in time for the Super Bowl, complete with cheerleaders and football players. The single and video feature rappers Nicki Minaj and M.I.A.

“Give Me All Your Luvin’ is catchy, and the lyrics are cheeky, but ultimately, it sounds like every other Madonna song, which might have been the point. (Madonna seems to acknowledge as much in a lyric that goes “every record sounds the same.”)

The video, at times absurd, lacks the controversiality that made Madonna so well-known in the 1990s.  Highlights include dancers wearing anime masks, a heavily made-up Madonna throwing a baby, and an attempted drive-by shooting with a tommy gun.

The views on the video, given its newness and mass interest, are frozen due to YouTube’s well-known view-count bug. It’s gotten 20,000 likes to 4,000 dislikes, a strong ratio, and 15,000 people have stopped by to opine in the comments, where a predictable flame war has erupted over whether Madonna is better than Lady Gaga.

“Just amazing, THE TRUE AND UNIQUE QUEEN OF POP HAS RETURNED,” wrote Danycleverboy.

The appearance by M.I.A. may well give a boost to the rapper’s new music video, “Bad Girls.” So far, though, it’s gotten far less attention based on the number of likes and comments. But this video may get talked about for weeks.

M.I.A, a style icon unto herself, combined modern hip-hop fashion with an Islamic burqa in the video, and the music and dance moves in  “Bad Girls” follows suit. The video, filmed in Morocco but with a vaguely Middle Eastern theme, features the region’s “bad girls” doing car tricks and sporting AK-47s.

Some music outlets on the Web are declaring this is the return of M.I.A’s “swagger,” and YouTubers seem to agree—even ones concerned with her recent Madonna venture.

“MIAs swag mothafuckaaa .Awesome!! so M.I.A is back? I was scared with the ‘give me all ur luvin’ video… but now this comforted me,” wrote juli9228 on YouTube.

M.I.A., it’s rumored, may also appear at the Super Bowl.