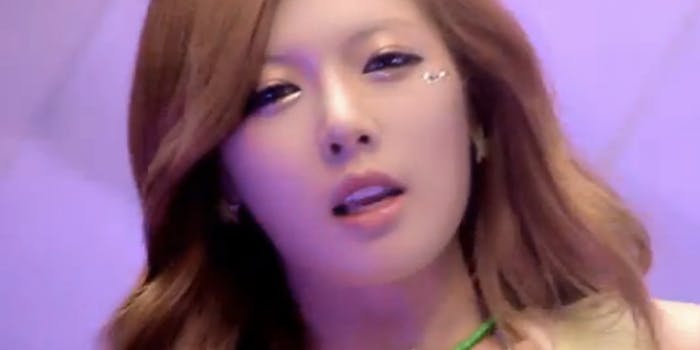 To the rest of the world, it looks like PSY (a.k.a. Park Jae-sang) burst onto the music scene last week with his addictive viral hit, “Gangnam Style.” After the hip hop song’s overwhelming success, PSY has become a household name in the West. He’s in talks with Justin Bieber’s manager and has even launched a brand new Twitter account.

But in his native Korea, the 34-year-old singer-songwriter has been a beloved star for years, and he’s got the connections to match. On Tuesday, he called upon pop ingenue HyunA, a silent player in the first video, to capitalize on his viral success by transforming it into a duet.

Best known as a member of Korean girl-pop quartet 4minute, HyunA made a cameo as the love interest in Psy’s original video. Even without lines, she made an impression: the billiard ball top she wore in the video sold out “instantly,” the Wall Street Journal reported. The starlet is quickly outgrowing her girl group, embarking on solo and duet work.

Now that it’s her turn to sing, hyunA has made a few variations on the song. While Psy sang “Oppa is Gangnam Style,” HyunA sings, “Oppa is just my style.” (Oppa, a Korean term of endearment for an older male figure, in this case refers to an ideal romantic partner.) She also assumes a babyish lisp for the role, unlike in most of her solo work.

Posted Tuesday, the YouTube video already has 4,000 comments and counting. Over at Omona They Didn’t!, LiveJournal’s hub for K-pop gossip, fans are disappointed by hyunA’s take.

“I have nothing against Hyuna … but that baby voice in chorus parts is just unbearably awful,” Ashiva wrote. “Like who thought that was a good idea?”

At All K-Pop, fans suspected hyunA’s voice was supposed to lend humor to the video. The first video’s elements of comedy are more or less echoed here.

“The producers of the song probably told her to sing like this because it sounds humorous and isn’t supposed to be taken seriously,” ASlove23 said.

Is HyunA’s take humorous, disappointing, or so-bad-it’s-good? Watch and see for yourself.