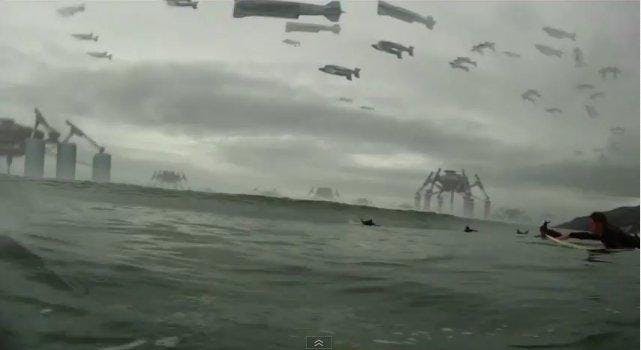 In this eerie, black & white short film, surfers find the calm in the storm.

In 1975, a little film called Jaws led to legions of surfers abandoning all thoughts of future sojourns on the water. Getting close with a great white shark is a disconcerting thought, but what if you were to bear witness to the apocalypse while catching some waves?

That’s the scenario beautifully depicted in “Apocalypse Later, Surf Now,” created by YouTuber keef70 with footage captured with a GoPro surf camera. According to a comment left by the user in the description, it took around a year to complete as he was learning to use the software while editing.

The effects were done in Maya, motion tracking in Mocha, and compositing in After Effects. And all on an iMac.

Though the video was intended to be left open to interpretation, its creator revealed the machines in the background are oil rigs which have drained the planet of one of its most valuable resources. The airships, meanwhile, are full of humans attempting to flee the devastating meteors.

And kudos to the creator for using the eerie instrumental “The Whales” by the Mermen, an oft-overlooked avant-surf trio from San Francisco. The best part though, is the way in which the surfers simply carry on doing what they do.

“[I]f the apocalypse did happen the surfers wouldn’t be making vain attempts to escape like the people in the airships. They’d be out in the water doing what they love, even if it could be their last day alive,” keef70 commented.

It’s the end of the world as we know it, and they’re cool with that, dude.