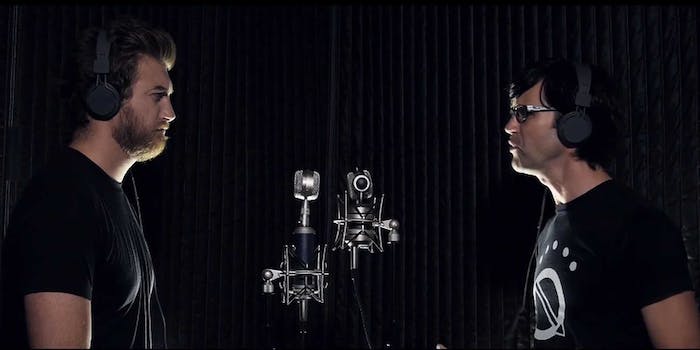 This Father's Day, Rhett and Link are trying to out-Chuck Norris each other, if you will.

This Father’s Day, Rhett and Link are trying to out-Chuck Norris each other, if you will.

Having already turned “yo mama” jokes on their head for Mother’s Day, the two YouTube stars engaged in a war of words over their fathers’ epicness.

Link’s father can bench press 400 lbs.—although if he uses both hands that number doubles—while Rhett’s dad was actually the lead singer of most ’80s hair bands. One invented the wheel, but the other invented inventions.

Each accomplishment is more outrageous (and epic) than the next. Some of their fathers’ feats don’t make much sense, but once they try to sell a bit, they don’t really have a choice other than to follow through with it, even if it’s something as ridiculous as claiming that their daddy can telekinesisport.

“My daddy can beat up your daddy,” Rhett said.

That may be the most accurate part of the song. Regardless of the truth involved. Neither of them are as apt at ending songs as their dads.