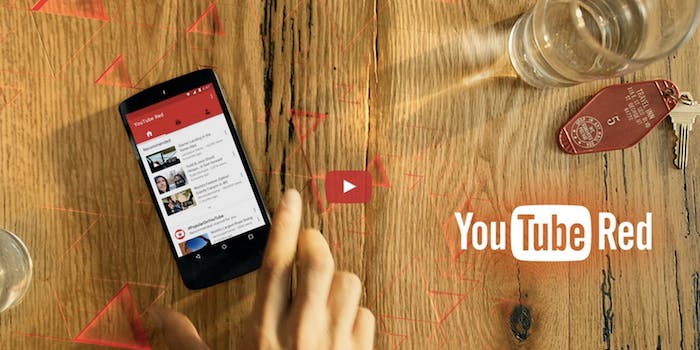 Fans may be able to sign up for a free month of YouTube Red starting today, but YouTube says not to worry—creators will still be getting paid for all the views those free users generate.

YouTube Red, the new paid subscription service from YouTube, launches today with a 30-day trial for new users to get them acclimated to the system. Creators and fans began to worry that this would mean creators would spend 30 days losing a cut of their revenue since they wouldn’t get ad money or subscription money from the free users. YouTube dispelled that rumor today with a blog post outlining how they’ll fund the creators during month one.

“With Google Play Music subscribers instantly joining YouTube Red, we will pay a portion of the revenue we receive from these subscribers to our creators on day 1,” explained Senior Product Manager Matt Leske in the blog post. “Even with 30 day free trials, our creator community will make as much or more as they would have without YouTube Red.”

Essentially YouTube and Google will dip into their own cut of Google Play Music subscribers who will now have access to YouTube Red as part of their subscription, but who won’t be granted the free month trial since they’re already active members. This means starting today YouTube creators will be generating income from two different YouTube pools, via advertisements and via subscription payments.

After the trial, Red will cost $9.99 a month and offer offline viewing, ad-free viewing, and background play. Creators will take 55 percent of total net revenues, based on watch time.

The system has been controversial, and since YouTube required all Partners to agree to new terms of service to be included in the site-wide system, any who did not had their videos made private before the launch. It’s a small percentage of overall creators, but the most notable holdout from Red is ESPN. The network can’t participate due to rights issues, and so all of its channels are now empty on YouTube.