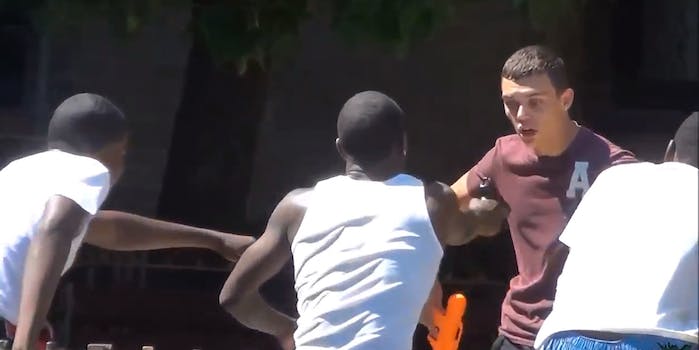 Are these YouTube prank videos taking harassment too far?

Water pistols tucked into his pants, he walks up to three teens and asks if they want to buy a gun.

Three young New Yorkers are making a name for themselves with one of the most popular prank channels on YouTube.

OckTV, as they’re known, bounce around different neighborhoods in New York wielding props and asking locals ambiguously offensive questions and filming their reactions. Often, their targets react with disbelief and confusion before being told that they are being pranked, then everyone shares a laugh and goes about their day. But if everything goes according to plan, the pranked react loudly and violently, giving OckTV more viral bait for their YouTube account.

In the video above, the OckTV pranksters, along with their friend DennisceeTV, approach strangers in the Brooklyn neighborhood of East New York (one of the areas with the highest crime in New York City), offering to sell them “gats,” “grips,” or guns. But what they’re really offering is water pistols. Get it? Hilarious.

The first two encounters take a predictably violent turn. The pranksters get choked and punched, and they’re warned that their joke wasn’t funny. The third encounter starts off tense and looks like it’s going to end violently, but it melts into laughter once they reveal that it’s all a YouTube prank. Surely the trio would quit while they were ahead, right?

That brings us to the fourth group of people they approach. DennisceeTV, water pistols tucked in his pants, walks up to a group of three teens sitting outside of an apartment building and asks if they want to buy a gun. They stare at him blankly and he repeats his question. That’s when the three teens jump up, one of them pulls out a real gun, and DennisceeTV is forced to beg for his life.

OckTV and other prank channels are flocking to the hood to film. Videos of them getting into confrontations with the people who live there are so popular, garnering millions of views on YouTube and sites like WorldStarHipHop.

The common denominator in all of these videos is that they’re targeting minorities, mostly blacks, in low-income neighborhoods. They choose these neighborhoods because they know residents there are already on high guard for crime and are more likely to react quickly and decisively. If they attempted these videos in a higher-income or suburban environment, they probably wouldn’t encounter the same type of response that they do in neighborhoods like East New York. People there would be more likely to call the police and report that they were being harassed rather than take matters into their own hands.

In another prank video, OckTV returns to the same Brooklyn neighborhood, this time snatching strangers’ cellphones out of their hands while claiming they just want to see the time. Reactions in the clip are understandably swift and physical. In one video, user RomanAtwood goes around pretending to steal gas out of cars. He has another upload where he walks by black people and yells, “What’s up, my neighbor!”—which he himself implies is a close approximation of that other N-word. Other YouTubers have posted videos like VitalyzdTV’s fake “drug bust in the hood” prank.

In an interview with Hot 97’s morning show, OckTV admits that they have tried pranking “other types of people,” but those videos weren’t as popular as the in-the-hood clips are. They also admit that while they may approach 100 people who ignore them, their videos are a montage of the handfuls of people who do react to their provocations. They’re capitalizing on a fascination some people have with dangerous neighborhoods and reaping the benefits of selling them a sideshow that essentially amounts to poking a bear with a stick.

What’s wrong with prank shows like this is that they’re not harmless fun, but serious, provoked altercations with people who, just prior, were minding their own business. Because most of the time no laws are being broken—though that point is debatable in the case of OckTV’s “grab a guy’s head and fart on it” gag—the jokesters usually hide behind a defense of it all being a prank and the other person not being able to take a joke. But not unlike the case of Freddy Fairhair, the naked guy who filmed himself asking women to look at his penis, what they are doing is, arguably, harassment.

Even worse, their behavior is validated through YouTube views, ad revenue, and the fact that their victims are so shocked in the moment that either they don’t call for help from law enforcement or they lash out themselves. And if the victims lash out, the prankster looks like the one being victimized, when that’s the exact response he expects and wants. This is highlighted in the phone-snatching video: A Brooklyn resident slams OckTV member E.T. to the ground, retrieves his phone and then walks away. A group of women near by comes to E.T.’s aid and asks if the other boy has just stolen his phone.

They should have asked him something else: “When is this going to stop?”