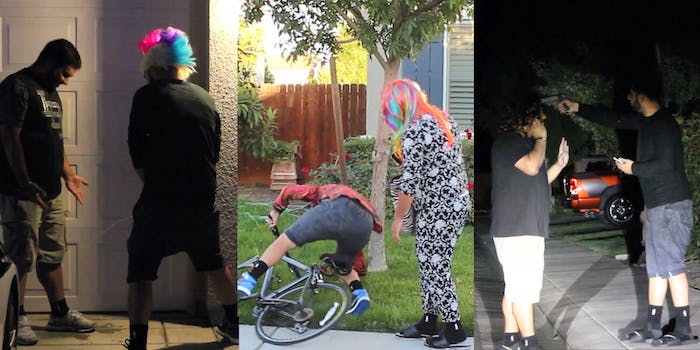 Watch this parody of all the terrible YouTube ‘prank’ videos

YouTuber Qias Omar threw some serious shade on Sunday night with a new video satirizing the new breed of “prank” video doing the rounds on the Internet.

We all know the type: A wannabe YouTube personality behaves intolerably in public, and is inevitably attacked for it—only to yell “it’s a prank, it’s a prank!” at the last minute in an attempt to avoid responsibility for their actions.

It might be deliberately stamping on stranger’s shoes, “mugging” people at ATM’s in broad daylight, or even armed robberies of apartments. Whatever the precise form, the key ingredient is the same: “Internet personalities” failing to realize doing a prank doesn’t exclude you from the basic rules of human decency.

Omar’s new video sets some of the most popular of these YouTube pranksters squarely in his sights—from Prank vs Prank to Roman Atwood Pranks, numerous accounts are lampooned in the video produced with HarrisK15.

Meanwhile, the even darker side of YouTube prank culture has been thrown into the spotlight over the last few weeks as prankster Sam Pepper—made notorious by a “prank” involving groping women in public—was accused by multiple women of rape and sexual assault.

Omar insists at the beginning of his parody that it’s “ALL LOVE NO HATE,” and “not a diss video”—but that’s not true. And it’s long overdue.