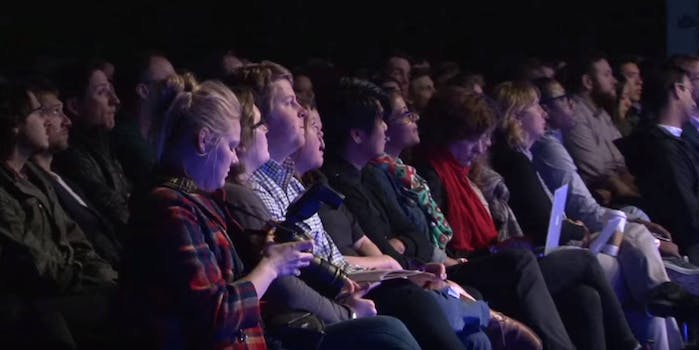 The event featured a performance from Sia and a call to action from Big Bird.

YouTube’s NewFronts focused on its breadth and dominance in the market for delivering entertainment of all forms, even if many of those in attendance had never seen the Web-famous stars onstage.

“There are perspectives and opinions we can not get on TV,” said YouTube CEO Susan Wojcicki at the Javits Center in New York Thursday night.

The celebs that other media brands trot out for their NewFronts would turn heads if they were caught getting their own drink at the bar, at YouTube’s event several top stars were milling about without anyone paying attention. Brands might know that YouTubers are some of the top talent for teens and tweens (even reporters gasped when Wojcicki revealed that now eight of the top 10 celebrities to tweens and tweens are YouTubers), but they might not be able to pick them out of a lineup.

And the streaming giant didn’t stop there: YouTube reaches more 18-49-year-olds than any network on mobile, cable, or broadcast, and more during prime time than the top 10 TV shows combined. (YouTube is reportedly toying with branching into live TV, though this rumor went unaddressed Thursday evening.)

The big sell was from media companies and brands like Toyota taking to the stage to encourage everyone to move media buys to digital. The big news was the move of $250 million in TV spent to online video from Interpublic, which buys for clients like Coca-Cola and Johnson & Johnson.  At Toyota, it’s moved YouTube to its core set of advertisers, a shift from treating the platform as a “risk.”

Lilly Singh played host to the night, with the required mix of comedy and inspiration that marks some of the biggest YouTube sensations. She talked about making a community with her fans, and how that helps brands like Coca-Cola that partner with her.

“They don’t turn my videos on as background noise,” Singh explained of her brand. “They choose me.”

She then introduced someone everyone was familiar with: Big Bird, who introduced a segment on YouTube kids that touted how they wanted to help create the next generation of Sesame Street on YouTube.

While the younger set gets most of the shine for YouTube fame, there’s also an older generation. When YouTuber Mindy McKnight took the stage and explained how her girl’s hair tutorials enabled her husband to quit his full-time job to help with the channel, advertisers murmured about the unlikelihood of that. It was a clear reminder of the mainstream’s misunderstanding of YouTube professionals.

“I know that many of you in this room may still think YouTube is a platform for people barely old enough to drive,” McKnight said. “But I’ve found YouTube is for everyone.” McKnight explained her expansion to a Millennial Moms channel aimed at the aging digital set.

Sports were another topic for YouTube, with NBA commissioner Adam Silver explaining his league’s embrace of the platform when many other publishers were blocking their content.

“We created our own channel, we also saw it as an opportunity to talk to our fans,” said Silver. “We saw that 60 percent of our 100 million views were coming from fans outside the United States. We firmly believe that the business that are popular globally tomorrow are the ones popular on social media today.”

Silver announced a deal to make all their NBA footage available on the YouTube Preferred advertising network, and explained their excitement about 360 video’s integration with sports content.

“That’s the thing about platform: You just can’t predict what the next best thing is going to be,” said Wojcicki. “Every day we have a new video that catches fire around the world.”

The presentation wrapped with a call out to Silento’s “Watch Me (Whip/Nae Nae),” the biggest viral video of 2015, to show how YouTube can seed a worldwide craze. When Silento himself rode out onstage in a mini pink jeep, the crowd may have been impressed the rock star. But patrons might not have realized the young girl with him, Heaven King, was the real architect behind the craze with her dance cover.

Oh, and then Big Bird, Elmo, and Cookie Monster got in on the viral dance.