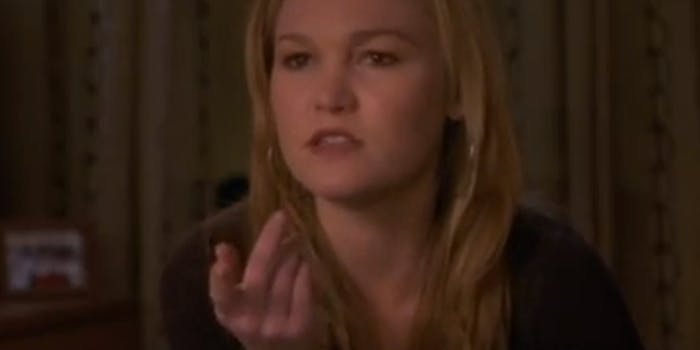 Due to the influx of quality and original programming from online outlets, YouTube and Netflix are poised to make a run at the Emmys.

Could this finally be Julia Stiles’s year to win an Emmy?

Probably not, because her Web series about a hooker named Blue is the worst. However, she could be nominated and this might be the year YouTube and other digital series win big, according to John Leverence, the vice president of awards for the Primetime Emmy presentation.

In an article on TVGuide.com, Leverence predicts that the effects will finally be felt this year from a 2008 rule change that allowed for non-regularly scheduled shows from non-traditional channels (NBC, HBO, etc.) to compete against established competitors.

“I suspect that 2008 will join 1988 — when the Academy introduced cable into eligibility — as a landmark year in the history of the Primetime Emmys,” said Leverence, adding that it took six years before two cable programs (HBO’s Stalin and Barbarians at the Gate) actually won awards in 1993.

It’s due to the influx of quality and original programming from online outlets, most notably Netflix, Amazon, and YouTube. It’s no surprise that both the critically acclaimed hit House of Cards and revamped Arrested Development on Netflix are already garnering award buzz, and as covered extensively on the Daily Dot, YouTube has invested heavily on more professional programming.

“The Internet is about to come to consciousness about the Emmys,” Leverence said.

Even though a bulk of YouTube-based shows are too short to compete in the televised awards viewers are used to seeing, that doesn’t mean the company’s pricey foray into original programming won’t be unnoticed.

Two categories to keep an eye on this year are “Short Format Live-Action Entertainment Program” and “Short Format Nonfiction Program,” which is usually dominated by the networks (i.e. NBC.com’s Jay Leno’s Garage). TVGuide.com notes that WIGS (where Stiles’s show is based), MachinimaPrime (home of the Halo movie) and AwesomnessTV could grab some awards in those catergories.

“We leave it to our voting members to determine quality, with excellence the criterion for nominations and wins,” Leverence says.

And have your checkbook ready, as an entry to be considered by the Academy runs around $600 to $700.

“The YouTube backyard barbecue video featuring Fido jumping in the pool is probably not going to be entered,” joked Leverence. “But it could be.”