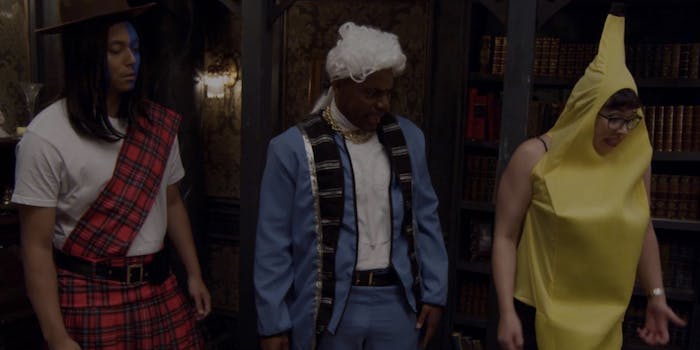 Which path will lead you safely from this celebrity-stuffed virtual haunted house?

In a traditional haunted house, you have to simply keep moving forward in the direction determined by the designer. However, YouTube Nation used the YouTube Space Halloween sets to construct an elaborate, choose-your-own-adventure haunted mystery that lets viewers pick their own spooky Halloween tale.

For Halloween: Can You Survive? YouTube Nation called on several celebrity friends to take part, including Felicia Day, Steve Zaragoza, and Tay Zonday. They’re gathered for a Halloween party when something goes terribly wrong.

Depending on what path you take, the whole adventure can be as long as a 28-minute experience, following the adventures of a pair of celebs as they decide to flee, keep partying, or investigate the mystery.  YouTuber GloZell plays your spooky host to the whole affair.

Choose wisely, the path you take will determine just how much of the awesome Guillermo Del Toro-designed sets you get to see.