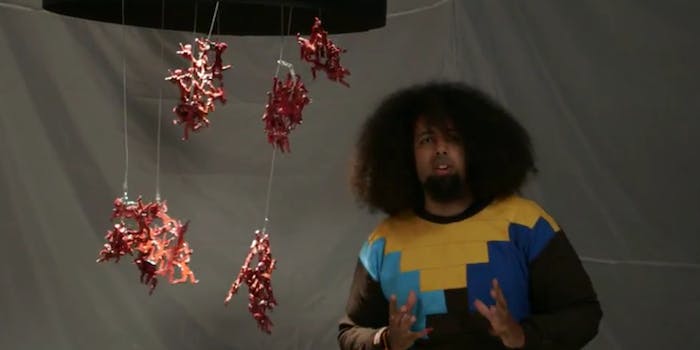 Miley Cyrus, One Direction, and Rihanna all get nods.

YouTube’s first ever Music Awards will take place Nov. 3 in New York City, cohosted by Jason Schwartzman and Reggie Watts, and the nominees were just announced.

You can place your vote here, and watch all the nominated videos. YouTube even included this handy how-to with Watts. His visual explanation of how social media works is actually pretty accurate.

As reported, the awards show will feature live performances from Arcade Fire, Eminem, and Lady Gaga, and they’ve just added Avicii, M.I.A., Odd Future’s Earl Sweatshirt and Tyler the Creator, and Walk Off the Earth to the bill. Veteran music video director Spike Jonze will be creating livestreamed performances throughout the night as well.

The nominations span just six categories, tailored to reflect videos that were highly viewed, shared, and commented on, or that represent growth or innovation. They’re also highlighting reinterpretation: The YouTube Phenomenon category presents the biggest viral hits over the past 12 months, which then spawned fan videos, including Baauer’s “Harlem Shake” and Psy’s  “Gangnam Style.” The Response of the Year category takes fan parodies or covers into consideration.

Here are all the nominees:

Video of the Year – videos with most fan engagement

Artist of the Year – most watched, shared, liked, and subscribed-to artists

YouTube Phenomenon – songs that generated the most fan videos

YouTube Breakthrough – artists with biggest growth in views and subscribers

Innovation of the Year – creative video innovations with most views, likes, shares and comments