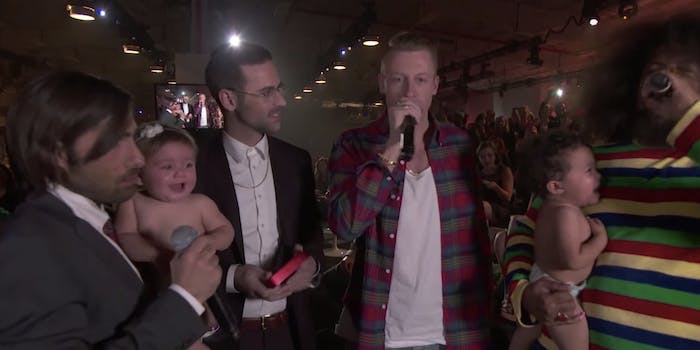 YouTube Music Awards are coming back, but online only

YouTube's best and brightest musicians will be honored in 2015 by the platform.

YouTube’s music awards will return in 2015 with a revamped look and feel, celebrating the best of music and performance on the video platform.

YouTube took a breather in 2014 to rethink the annual awards show, and as a result have moved the proceedings from a splashy live event to an online takeover. In 2013’s inaugural outing was livestreamed to a dismal 220,000 viewers from New York City, despite featuring performances from heavyweights like Lady Gaga and Eminem. Overall the event was glitchy, with mics cutting out and performers missing cues, and it failed to have the kind of “water cooler moments” that other big award shows like the VMAs or Grammys can guarantee.

However, one takeaway from the event is that post-stream clips have been watched 54 million times, a clear contributing factor to YouTube’s decision to approach the awards like a produced music special that lives as a one-day takeover on YouTube. The company is also renewing its partnership with Vice, which produced the first event in 2013.

Awards were previously based on fan voting, determined by their sharing and liking of videos, resulting in the biggest award going to Asian supergroup Girls’ Generation over Western heavyweights. In 2015, the awards will be determined by total user activity and handed out virtually. YouTube has already launched a channel specific to the awards, youtube.com/musicawards.

The relaunch of the music awards comes on the heels of YouTube’s new YouTube Music Key, an ad-free subscription service offering offline video viewing and access to 30 million songs via Google Play. The service is currently in private beta, with eventual membership rolling out at $7.99 a month. Most likely, general access will coincide with the awards push.