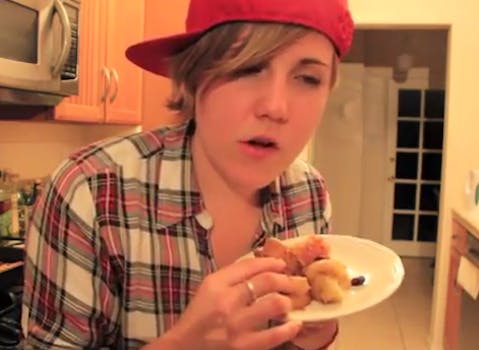 It’s Thursday, which means it’s time to check in on Hannah Hart getting hammered. This week, the Canadian drunkard is baking up a batch of American strudel, and she’s brought a few of her closest friends: whiskey, white wine, and an entertaining redhead. There’s no telling how legitimately plastered Hart gets in the episode—and if she’s any more drunk than any other week, for that matter—but by the video’s midpoint, she’s singing Taylor Swift into a Swiffer Sweeper.

2) Jeremiah McDonald, “A Conversation with my 12 Year Old Self: 20th Anniversary”

Twenty years ago, 12-year-old actor Jeremiah McDonald recorded a video of himself asking questions into the camera as if he’s talking to his future self. He said things like “You look bigger” and “Is Molly still alive?” before turning his tone reactionary and speaking as if he’s just been asked a generic round of interview questions. From his living room in 2012, the 32-year-old McDonald took that 20-year-old clip and spliced it into the form of a conversation, adding his own modern narratives and subject matter to the story. The result: a hilarious and sometimes eerie conversation with his 12-year-old self.

Let’s cut to the chase: As of July 4, 2012, the Higgs Boson is the last fundamental piece of the standard model of particle physics to be discovered experimentally. But what does that even mean? The guys from Minute Physics have the answer, in a new video so intricate and explanatory that it takes a full three minutes to get across—and that’s only part one!

How’d you spend your Fourth of July holiday? Baltimore-based rapper DeStorm spent his in the lab, cooking up “Cashing Out,” a hard-hitting ode to hustle and machismo. “So you talk about your cars and your AKs,” he raps. “But you ain’t really stars. You just fake, ay.”

If you didn’t already know, YouTube queen Jenna Marbles used to moonlight as a go-go dancer while she was in grad school in Boston. Since then, it seems to Jenna like nearly each of her 3.5 million subscribers have spent the good part of her career clamoring for her to show off her dance moves. Yesterday she finally succumbed to the peer pressure, but be careful: “It’s not going to be like you’d expect it.”