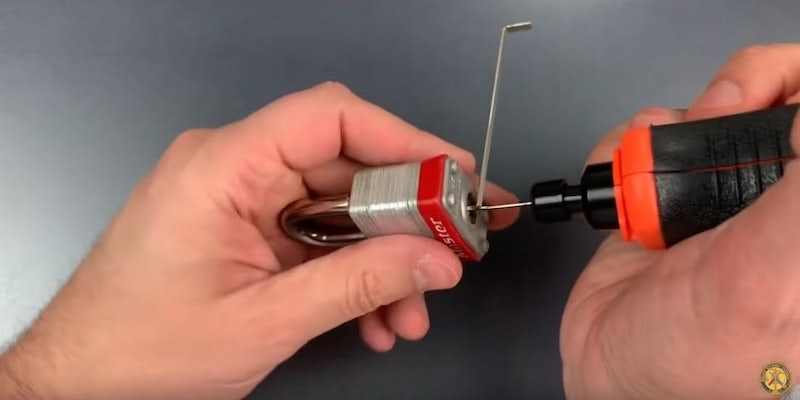 Repurpose that tool you only use once a year.

Now that Halloween is dead and buried for the next 364 days, here’s another brilliant use for your electric pumpkin carver.

As demonstrated by a YouTuber named LockPickingLawyer—whose channel, which has nearly 230,000 subscribers, quite obviously consists of him picking locks with various tools and methods—you can use your electric pumpkin saw to break open the locks you might buy at Home Depot.

As LockPickingLawyer opines, the electric pumpkin saw ranks “right above the electric DVD rewinder on the list of the most useless inventions in human history.” But he wonders if he can find some usefulness for the tool by turning it into an electric lock-picking gun.

(Spoiler alert: He can.)

First, he replaces the saw’s blade with a wave-rake tip pick, and after that, it’s a matter of using a tension wrench and the raking motion of the pumpkin carver to begin opening the locks. A Masterlock is no problem for the invention. Neither are an unbranded Chinese shrouded padlock, a Kwikset rim cylinder, or a Brink’s cable lock.

All open with relative ease, but the YouTuber wasn’t completely impressed with his repurposing of the pumpkin saw.

“To be frank, I find my normal raking technique a little more effective,” LockPickingLawer said on the video. “Not only do I go in and out, but I also incorporate a rocking motion. I find that works very quickly most of the time.”

Fair enough, but ultimately the science of this experiment was proved true.

And now you know that if you’re not using your electric pumpkin saw to make funny faces on gourds, you can utilize it to open your bike lock the next time you lose your key. Just don’t use his tricks for anything nefarious; remember, lockpicks are illegal in some states.