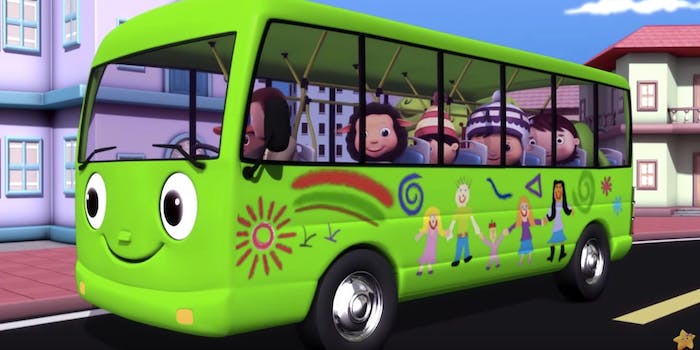 The app will be available in the U.K. and Ireland, Canada, Australia, and New Zealand.

Despite Psy’s “Gangnam Style” having the most views on all of YouTube, there’s another video that people have spent more time watching: “Wheels On the Bus,” a 54-minute clip from LittleBabyBum, a creator you’ve probably never heard of—unless you’ve got a toddler.

Teens and tweens may be the demographic most associated with YouTube, but there’s a younger generation below them that treat their devices just like a TV, and a generation of parents looking for easy ways to entertain, educate, and quiet down their littlest ones by handing them a phone or an iPad.

Kids content on YouTube continue to skyrocket, with 10 million downloads of the the YouTube Kids app. Launched nine months ago in the U.S., it’s now expanding its child-safe reach to international markets. Starting today, the app will be available in the U.K. and Ireland, Canada, Australia, and New Zealand.

Through the Kids app, some searches are automatically blocked, like “9/11,” and aspects like comments are disabled. However, the app has drawn criticism from the FTC because YouTube content often includes brand-sponsored content, while 1970s FCC rulings prohibit children’s TV from directly selling products.YouTube isn’t quite TV, but it’s definitely hawking brands to young, impressionable eyes.

Even if there are flaws with the app, for parents looking for a safer space for their kids than the wild world of all of YouTube, the app will expand its global reach starting today.