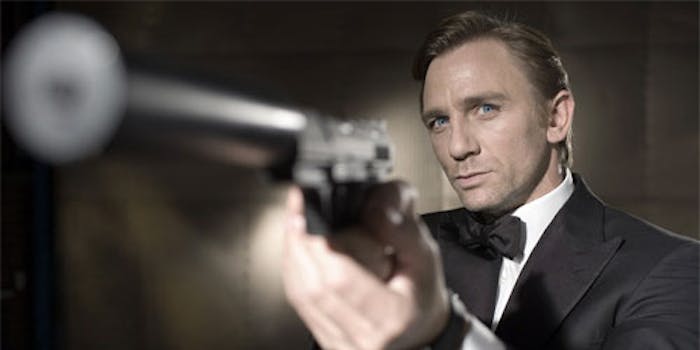 A lyrical interpretation of and tribute to the iconic secret agent.

Australia has an answer to the Lonely Planet: musicians Sean “Kormers” McCormick and Rhys “rummY” Ptolemy. As Lush, they’re the only people to ever successfully make fun of James Bond.

McCormick and Ptolemy are the makers of “His Name is James Bond,” a lyrical spoof of the iconic secret agent sung to the tunes of Monty Norman’s “James Bond Theme.” (Yes, that one.)

In just under two minutes, McCormick and Ptolemy manage to make fun of Bond’s come-ons, comebacks, age inaccuracies, drinking problems, transportation options, and much more, with a daring wit that would make Roger Moore proud:

“My name is James Bond and I love to get plastered. I bang heaps of bitches, because I’m a smoother bastard. I tell them I love them, then I fuck off back to London on my jet pack. That’s how I roll.”

The video, hosted on the YouTube channel for Lush’s video production offshoot RunningCorners, has amassed 301,465 views, with most coming in the past week.

“I had tears of laughter, which required some explaining when my boss walked in!!” commented user lsear2905.

User mrerdk agreed: “[H]ilarious, one ‘like’ is not enough for that masterpiece! ;)”

Like “Whole Foods Parking Lot Rapper” or any of the Lonely Island’s Internet classics, the song works as a standalone, a fact confirmed in the comment section.

“Is there a possibility to get a .mp3 file?” asked YouTuber CrixCz.