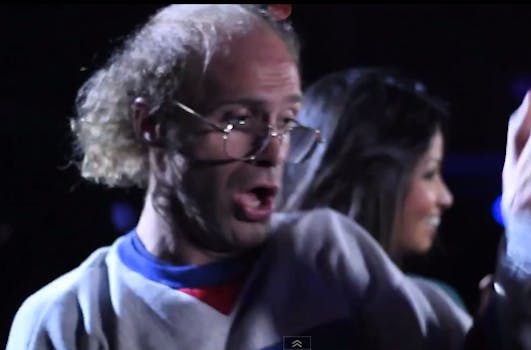 It’s hard to tell who’s jumped the bigger shark, but in the music video for new single “Let It Roll,” presumed tough guy rapper Flo Rida teams up with lisp-lipped visionary Keith Apicary to “bring the hype with their dance moves.” Apicary (comedian Nathan Barnatt) cruises down to the strip club in faded jeans and hoodless sweatshirt, bringing the heat in ways that only a balding man still clutching onto a mullet can.

Thanks to animation from @peepholecircus, b3ta founder Rob Manuel has crafted part two in his recent ode to the Internet, “Trapped in Technology.” A dance-ready track that comes in at just over two minutes, the song details the little victories that come with being an Internet micro-celebrity, like increased follower counts, influential retweets, and being the first to cite a meme. But the track’s a bit of a bait-and-switch. By the end, Manuel’s singing about the ways in which the Internet proves his need for emotional validation.

You don’t have to live on an exotic farm in Hawaii to make your own honey. These days, there are urban beekeeping activists popping up in cities all over the country. In today’s episode of Subculture Club, the boys meet up with Los Angeles-based urban beekeeping guru Kirk Anderson, activist Max Wong, and a slew of other L.A. beekeepers to talk about the growing community. “Rather than one person having 200,000 hives, 200,000 people should have one hive,” beekeeper Jessica said.

Because we haven’t shown enough love for the Internet today. The popular host of My Drunk Kitchen steps outside to record her ode to the World Wide Web with help from guitarist Travis Shawn Hill, whose low-end harmonies give the love song a bit of a doo-wop feel. “Oh, Internet. Keep me on your feet,” Hart sings on the hook. “I sing to you pretty much constantly.”