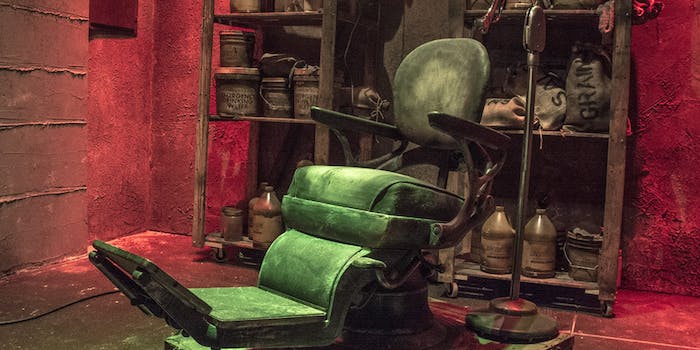 YouTube gives a 360-degree look at its terrifying Halloween sets

YouTube‘s scariest video this Halloween season might be a simple set tour.

YouTube Space LA is launching its annual Halloween sets with a spooky 360-degree tour of the space. Users can views all aspects of the set online, with occasional doors opening for no reason. The whole video you’re wondering what might be behind you. By the time you reach the dentist’s chair with its flickering apparitions, you’re thoroughly freaked out.

YouTube partnered with Skybound Entertainment and comic book creator Robert Kirkman to give YouTube creators the opportunity to film on the new Halloween sets between now and Oct. 29. Additionally, 15 creators were selected for a special script-writing workshop and are in competition for a development deal with Skybound.

This is the third year that YouTube has set up Halloween-specific sets for creators. This time out the directive is to create content around the theme, “What happened here?” The resulting videos will roll out between Oct. 26 and Halloween.