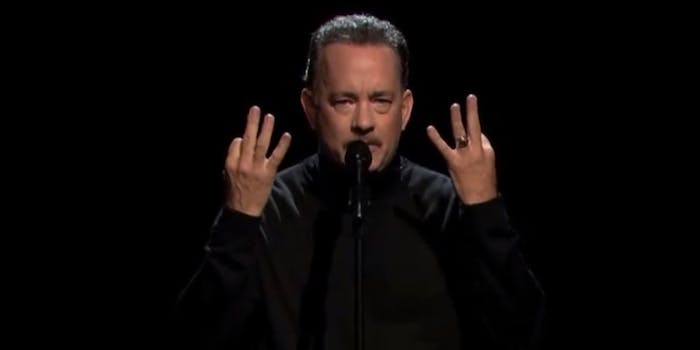 Actor Tom Hanks stopped by Late Night just a few days after his accidental f-bomb on Good Morning America became a meme and proved even more that he is an Internet darling with his slam poem on the popular ‘90s sitcom Full House. Just remember, “It’s a house… full of men.”

Bringing the best of Halloween and the winter holidays together, claymation artist Lee Hardcastle brings this Sufjan Stevens song to life and turns the classic “Frosty the Snowman” tale on its head as Frosty aids the boy who brought him to life against a zombie apocalypse.

3) misskatie861, “The Saddest Little Cardinal: We were supposed to win not lose!”

There’s no crying in baseball, but we’ll make an exception for this kid, who really wanted the St. Louis Cardinals to go to the World Series. His bedtime coincided with Game 7 of the National League Championship Series, and he wanted to watch the whole game. There’s always next year, but for a four-year-old, that’s too long.

Staples has plenty of space and office supplies, so why not hold a meeting there? That was the idea behind Improv Everywhere’s latest prank, as 24 actors staged a board meeting in the office chair supply section until confused Staples employees finally broke it up.

Ever wonder what a city was like without anyone it? Without having to imagine the end of the humanity, the Thrash Lab continue their “Empty America” series with a first-hand look at different Seattle landmarks without a person in sight.