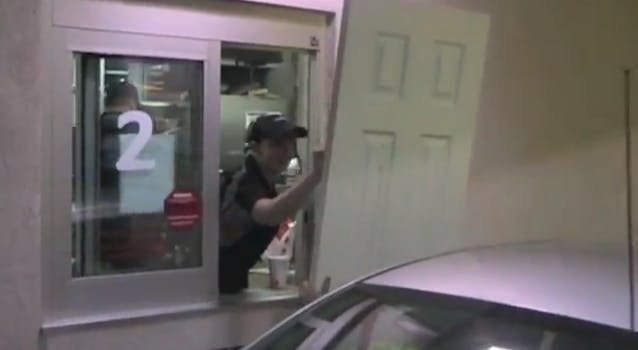 In this version of trick-or-treating, the door comes to you.

On Halloween, you usually go up to the door to trick-or-treat—but this year, the door comes to you. This door travels all over town, from houses to a train, a drive-thru to a local store, and once you knock on the door, you’ll be greeted with candy and cheer.

In one continuous shot, Devin Graham and a friend fight their way through an abandoned and zombie-ridden shopping mall, but before long, their options for escape start to dwindle down.

Air New Zealand teamed up with The Hobbit director Peter Jackson and his digital effects team to spice up their pre-flight safety video. No matter where you’re headed in Middle-earth, Gandalf and the rest of the flight crew want to make sure that you’re safe. Jackson even channels his inner-Gollum for a small cameo.

The Upright Citizens Brigade pays homage to Scream. With one question from the serial killer, the variety of answers goes to show that we all have a different idea of what makes a scary movie. But be wary if the film snob doesn’t approve of your choice. He just might kill you anyway.

Shot with a high-speed digital camera and set to soothing piano music, the guys at Thrash Lab bought a bunch of pumpkins for Halloween and instead of carving or putting them on display, they creatively smashed them all on their own. In slow motion.