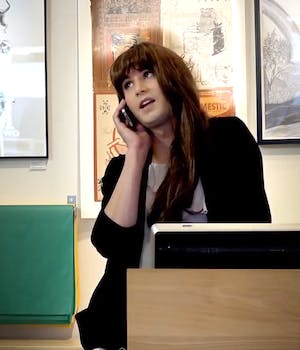 The boys are back with a new book deal and more wackly lines known to come out of girls' mouths.

The guys behind Shit Girls Say have a new book coming out tomorrow. To celebrate, they’ve released a fourth episode of wacky, über-girlie lines known to come out of girls’ mouths. “I keep thinking today’s Tooosdayyyy.” No kidding.

2) Ben Folds Five and Fraggle Rock, “Do It Anyway”

Geek pop sensation Ben Folds teamed up with comedian Rob Cordry, a bunch of Fraggle Rock characters, and the Nerdist network to premiere “Do It Anyway,” the first single from the band’s first new album in 13 years, The Sound of the Life of the Mind.

The Gregory Brothers leave their first mark on the Obama vs. Romney campaign for the New York Times, creating an Auto-Tuned, video game-inspired mashup of national convention speeches from the president, the former governor, and their two wives. The final round’s a “Deity Challenge.” Take one guess at the winner.

4) Vsauce, “Why Did the Chicken Cross the Road?”

Seems like few people are putting in more work on YouTube these days than the scientific great Bill Nye. This week, the Science Guy teams up with longtime YouTube educator Vsauce to finally arrive at an answer for the age-old question: “Why did the chicken cross the road?”

Last week’s Hater column predicted that “Call Me Maybe” was out and “Gangnam Style” is now in. But is it possible the great PSY music video could get surreptitiously dethroned by YouTube’s newfound fascination with remixing Honey Boo Boo? This new one from remix maestro WTFBrahh is good enough for a Saturday night.