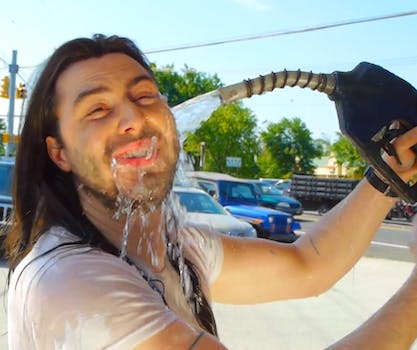 Lord of the Party Andrew W.K. is back with a new video about—you guessed it!—partying. Plus: More running puns than you can shake a stick at.

Party boy Andrew W.K. has made it clear that he never intends to stop partying—ever. The New York City-based songwriter’s new video supports that full-on. Called “It’s Time to Party,” the “sound effects only” shot finds W.K. rooting through the library, raging at the laundromat, and raising hell at the gas station.

Comedian Brian Oji knows a thing or two about road rage, over-aggressive driving, and frantic roadrunners who need to get off the road. His video, a supercut of all three, totally nails how anxious people can get when they find themselves behind the wheel.

Since 2003, Killeen, Tx., native Elizabeth Laird has hugged Fort Hood soldiers before they get on the plane to go to work and as soon as they step off the plane upon their return. In that time, she has hugged over 500,000 soldiers and routinely wakes up in the middle of the night to welcome returnees home. Laird says “it’s just my way of saying thanks for what they do for us.”

Laci Green’s back online, and the sex education world is better off for it. In her second video since taking a month off YouTube and Tumblr, the California-based edutainer takes a good hard look at the labia, “you know, the two lips that are outside your vagina.” If you have questions, Green has answers.

How many running puns can you make without repeating the same one twice? If there’s ever a guy to figure that out, it’s Matt McManus. Step inside the mind of the Human Graffiti.