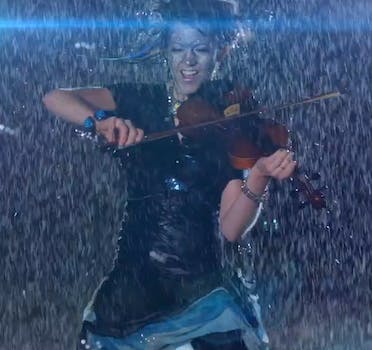 LIndsey Stirling continues to break new ground in the art of the violin music video. Plus: Sarah Silverman gets political.

Violinist Lindsey Stirling and boyfriend Devin “SuperTramp” Graham team together for the next stunning music video in Stirling’s mighty arsenal. The song is an advanced blend of classical and modern music, but it’s the way Graham mixes the changing scenes with Stirling’s hard-driving track that make this clip a must-see.

Comedian Sarah Silverman stops by her YouTube channel to log a few gripes on the voter ID laws that she believes will prevent potential Barack Obama supporters from voting this November.

This week on Awkward Family Photos, Mike and Doug take a look at some of the goofiest childhood portraits that a father’s ever seen. Apparently it’s okay to dress up like a Diaper Ninja—or Edward Tamponhands. Plus, the guys hop on Skype and chat with the man behind the “Beautiful Mind” photo, long considered one of the most iconic shots to ever show up on site.

A father in northern California spent two weeks tracking wind patterns before sending his son’s favorite toy train Stanley into the stratosphere in a weather balloon attached to an HD camera. Fugelseth then manipulated Stanley’s face to react to the changing conditions, creating a heartwarming story of air travel and childhood friendship in the process.