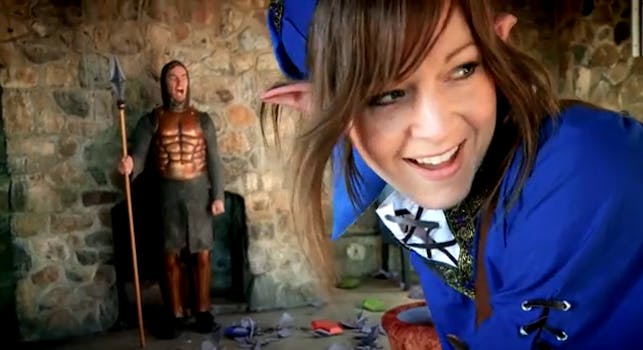 Freddie Wong and Lindsey Stirling team up for a star-studded Legend of Zelda sketch.

If you think about it, Link is kind of an ass going around and smashing every pot in sight without any thought of the nearby guard. Freddie Wong recruits Lindsey Stirling to reprise her role as the mischievous Hylian who just can’t resist a reset room of things to smash.

An airport pianist takes a break from playing standard Christmas carols to passersby and starts playing a number of viral Internet hits, including the Nyan Cat song, Gangnam Style, Chocolate Rain and the Rickroll (among others) before returning to more Christmas music.

Kurt Schneider teamed up with Max Schneider and Nickelodeon star Victoria Justice for their latest medley of the most notable holiday hits in which they played back on cell phones without the aid of video effects.

With Christmas around the corner, the kids are asked to explain how to wrap a gift to a friend, and while one knows what he’s doing, the other seems unsure of himself as he ends up with a handful of glue.

Tommy Wooldridge has never been on a date, so what better way to get started than putting yourself out there? However, the girls have no idea they’re actually on a date, so naturally awkwardness ensues.