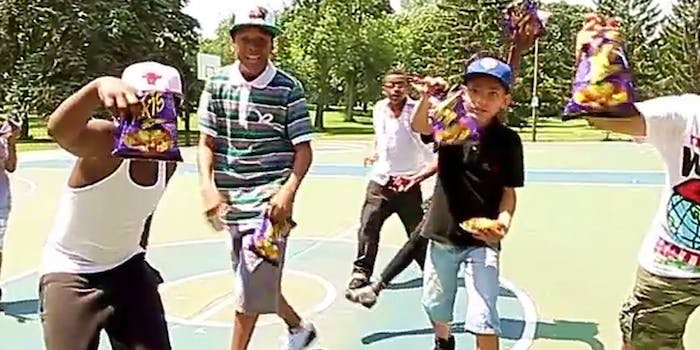 Remember “Swag?” How about “Snack?” “Hot Cheetos & Takis” is the new jam, and it arrives from the Minneapolis-based Y.N. Rich Kids crew, known for their decidedly positive raps. If this video doesn’t have you running to the corner store, I don’t know what will.

Daymon Patterson’s “5 Guys Burgers and Fries Review” is the hottest thing on YouTube, so naturally the Gregory Brothers had to give it the Songify treatment. “Oh my goodness! I wish you could smell what I’m smelling!”

The Above Average Network has an idea to make the classic Look Who’s Talking even better: flip the first scene so that it’s not taking place in a vagina. Then get the baby to stop talking—since,  you know, babies don’t speak in full sentences.

4) The Woodcreek Faction, “OMG The Heat”

What’s the best way to fight back the dog days of summer? Well, you could try to douse yourself in water. Or you could walk really slowly so as to avoid overexertion. Or you could… Ah, forget it. It’s the middle of August—simply too damn hot out there.

17 years ago, the Young Montana Media Group rounded up a handful of school children to explain what they thought the Internet would be able to do by the time they get to college. The outcome is strangely accurate and alarmingly retro. Nice haircut, sixth kid. It’s 2012, take the bowl off your head.