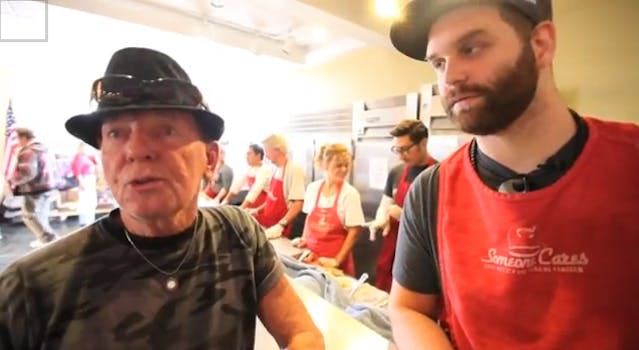 Epic Meal Time delivers an epic feastl to those in need this Thanksgiving.

The boys of Epic Meal Time team up with Chef Zadi, Hannah Hart, Jimmy Wong and KassemG to create a Thanksgiving feast of epic proportions (the only way they know how) for one lucky soup kitchen.

A childhood fantasy is brought to life as over 1,000 bags of leaves are emptied into a yard to create a 17 foot pile. And once you have a gigantic leaf pile there’s only one thing left to do: Jump!

The family’s gathered around the table this Thanksgiving and all of the holiday movie cliches play out as everyone passes the food around. Except it’s all one family at one table, which makes the romance subplot a little weird.

David’s noticed that some people have been treating him different lately and thinks his mustache might be to blame, but some of his mannerisms show that your ‘stache doesn’t make you creepy—being creepy makes you creepy.

Don’t forget your table manners for the holidays. There’s a particular way of eating and arranging the various foods at meal time, so make sure that your plate won’t get you sent to your room.