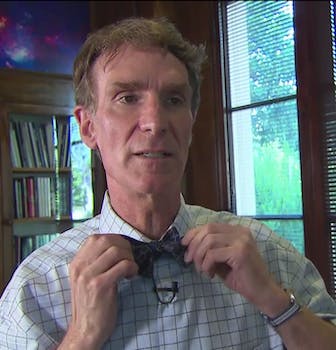 1) Nerdist, “Tie a Bowtie with Bill Nye and Chris Hardwick”

There are men who wear bowties, and then there’s Bill Nye. The tremendously popular Science Guy made the shortened, ribbon-tied neck piece a fashion icon in the 1990s when his TV show Bill Nye the Science Guy taught kids that it’s sometimes actually cool to experiment with science.

Those kids are all grown up now, but in the wake of casual dress codes in office spaces, most are still in the dark when it comes to tying a bowtie. That’s why Nerdist’s Chris Hardwick has wrangled up the legend himself to provide a little how-to. It’s a simple study of a complex knot. Prepare to be dazzled.

All this talk about Rainn Wilson’s new SoulPancake channel on YouTube and so far, all we’ve seen is this van. Today, Wilson takes the cameras into the SoulPancake office to give viewers a taste of what’s going on behind the scenes. What do we find out? Wilson hasn’t been pulling his weight around the SP shop.

3) Chad Neidt, “Do You Have a Minute for the Environment?”

Do you have a minute for the environment? Eight words that should elicit cringes from even biggest tree hugger in the city. It’s even worse if the guy asking you for a minute is asking for the sake of his movie script.

There will likely come a time in history when children will only know about Mario and Luigi from the creative knockoffs that content creators have made about them. That’ll be a strange time, but for now, it’s fun to think about all the different interpretations people can come up with for the legendary Nintendo-based brotherhood.

5) Keenan Cahill and Electrovamp, “Hands Up”

A few weeks ago, YouTube star Keenan Cahill announced that he was breaking with pop song lip synching and heading towards original compositions. He wants to be an artist who sings his own material, much like the pop stars that he grew famous emulating. “Hands Up,” which features electro-pop duo Electrovamp, is his first track, and it’s just as dance-ready as you’d expect—though somebody needs to turn Cahill’s vocals up a bit.