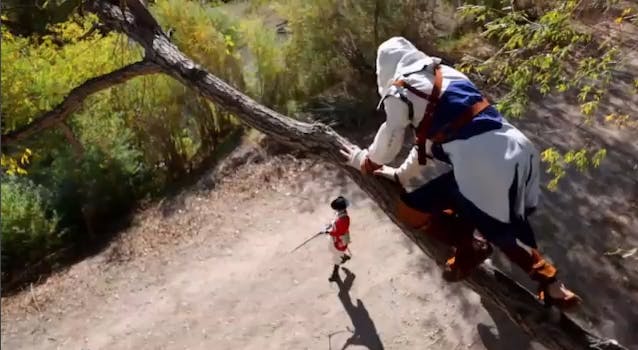 When one British soldier manages to escape from Assassin Creed 3’s Connor Kenway, he uses his knowledge of the American colonial-era land and impressive parkour skills to catch up with his prey. Sure, he might have caught the soldier faster without all of those flips, but where’s the fun in that?

2) MuchMusic, “We Teach Psy How To Dougie”

Psy’s interview with MuchMusic’s Lauren Toyota takes a hilarious and awkward turn when she decides to teach him how to Dougie before Justin Bieber, and after the quick lesson, he manages to pull it off better than Toyota.

No matter which sport is your favorite, each team has “that fan.” While the hockey season is still in a lockout, the focus turns to basketball. The NOC covers the stereotypical fan from every team including this Heat fan, who also likes the Yankees, Manchester United, Darth Vader and large corporations.

The Amazing Spider-Man really wasn’t that amazing, according to the latest Honest Trailer. He gets his father-figures killed, breaks everything, is creepy towards his romantic interest. And the reboot has more in common with the previous trilogy at second glance.

We’ve seen our share of Halloween pranks on YouTube, but this one at DePaul University might be one of the more terrifying for some on the Internet. One person dressed up as Slender Man, picked a dark alley to stand in and the camera catches the reactions. Some ignore him, some approach him, but most take their cue from Slender and hightail out of there.