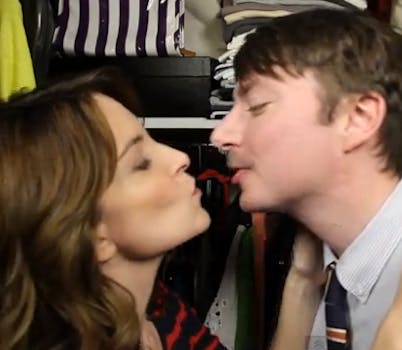 Tina Fey stops by investigative journalist Mike O'Brien's closet for one of his famous 7-minute interviews.

Comedy queen Tina Fey stops by Above Average Networks’ quick-witted closet to take seven minutes of questions from rugged investigative journalist Mike O’Brien. Not surprisingly, Fey has a whole slew of opinions about which Cosby family member she’d most like to watch her shower.

Superstar short filmmaker Devin Graham traveled to Hungary to film his latest thriller, a 3-minute exposition of basketball tricks made in tandem with the acrobatic sport squad Faceteam. See if you can keep up with some of these tricks.

Internet Comment Expert Erik Hoffstad drops in for a quick explanation of how to handle hipsters. Not surprisingly, it involves an “8” and some equals signs. Warning: NSFW.

Hilarity ensues when two rookie league crooks are tasked with sneaking into a family’s safe for their boss.

Butchers are boring? Please. Butchers are essential. And according to this new 8-minute mini-documentary from subculture scene-scopers The Thrash Lab, they’re turning over a new leaf. There’s a new movement of youth working its way through the meat cutting culture, and it’s starting in San Francisco. Take a peek at Angela Wilson and the new guard in badass butchery.